Galaxy Formation at Redshift ~0.75: A Low Mass Survey & The Role of Environment 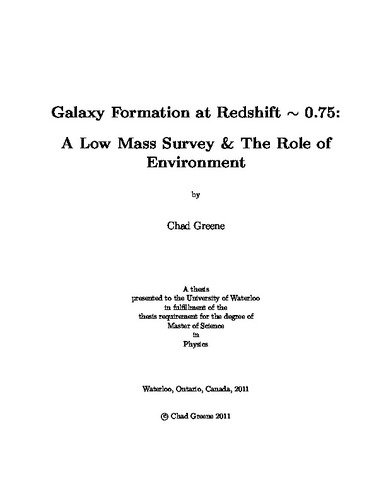 The majority of galaxy formation studies which explore beyond local redshifts do not typically probe down to the dwarf galaxy stellar mass range of ∼ 10^9 Msun . Thus trends in the observed evolution or characteristics of galaxy formation at a particular epoch are based upon populations of massive galaxies. However the currently favored Λ-Cold Dark Matter (Λ-CDM) theory is based upon hierarchical clustering and merging of lower mass systems, which proceed to make the higher mass, complex morphology of galaxies we observe. Thus it is clear that within the dwarf galaxy mass regime there should be a signiﬁcant phase of galaxy formation and evolution. This work aims to uncover the inﬂuence of local environment on the formation and evolution of dwarf and massive galaxies beyond local redshift, probing down to a mass range lower than that which has been explored by previous studies. A previously successful study titled the Redshift One LDSS-3 Emission line Survey (ROLES), released results for a redshift of z ∼ 1, which compared the [OII] luminosity and galaxy stellar mass functions ([OII] LF and GSMF respectively), star formation rate density (SFRD), and speciﬁc star formation rate (sSFR) relations, with a local SDSS dataset. This led to the expansion of the study to lower redshift (this work) which explored low stellar mass galaxies at a redshift of z ∼ 0.75. This follow-up study referred to as ROLES75 (z ∼ 0.75) targeted the same two deep ﬁelds explored by the z ∼ 1 study (GOODS-South, MS1054-03 FIRES), which have extensive public photometry. Low mass targets were selected for study by their K-magnitudes (22.5 < KAB < 24) leading to a dwarf mass range of 8.5 < Log(M∗/Msun) < 9.5, and which were most likely to be within our redshift range (0.62 < z < 0.885). Follow-up multi-object spectroscopy targeted the [OII]λ3727A emission line star formation tracer in these targets allowing us to identify and obtain secure spectroscopic redshifts, SED-ﬁt stellar masses and observed [OII] luminosity calibrated star formation rates down to limits of Log(M∗/Msun) ∼ 8.85 and SFR ∼ 0.1 Msun/yr . Science results presented here are similar to those published by the ROLES z ∼ 1 study, however we also studied the inﬂuence of the high versus low density environment in which the galaxy populations reside. This study conﬁrmed that while the [OII] luminosity was higher in earlier times, environment does not inﬂuence galaxy formation at z ∼ 0.75. The faint-end slope of the [OII] LF, α ∼ 1.25 measured here, is also observed to become increasingly more steep with increasing redshift. The [OII] luminous GSMF is observed to not have signiﬁcantly evolved since z ∼ 2.75, conﬁrming the result of the previous ROLES work. However the impact of environment on the GSMF is apparent in the high mass end where the imprint of structure from the CDFS ﬁeld enhances the stellar mass function above the ﬁeld population. There is also weak evidence of a bi-modal [OII] luminous GSMF indicated by an ‘upturn’ near ∼ 10^9 Msun in the low density ﬁeld population. The SFRD at z ∼ 0.75 does not conﬁrm the picture presented by the ROLES z ∼ 1 study where a constant scale factor was applicable to the local SDSS SFRD to obtain the z ∼ 1 SFRD. The SFRD in the high mass end at z ∼ 0.75 is lower than would be expected based upon a constant scale factor, while the low stellar mass end exhibits some consistency with this picture. In the high density environment, this dominant SFRD (over the low density ﬁeld population) is driven by the high density [OII] luminous GSMF in the high stellar mass end, rather than through an enhancement of the SFR. The normalization of the sSFR − M∗ relation at z ∼ 0.75 is found to lie between those corresponding to z ∼ 1 and present day. There is a subtle ‘upturn’ in the sSFR − M∗ relation conﬁrming this observation which was also present in the ROLES z ∼ 1 study but not present in the local SDSS sSFR − M∗ relation. The sSFR of active galaxies does not depend upon the local density in which they are forming, conﬁrming the same conclusion based upon the [OII] LF. However, there is redshift evolution of the sSFR − M∗ relation with respect to local density. The high density sSFR − M∗ relation for star forming galaxies was dominant over its low density counterpart at early times, with the opposite the case at present day. There is suggestion of the crossover or rollover transition occurring at z ∼ 0.75.