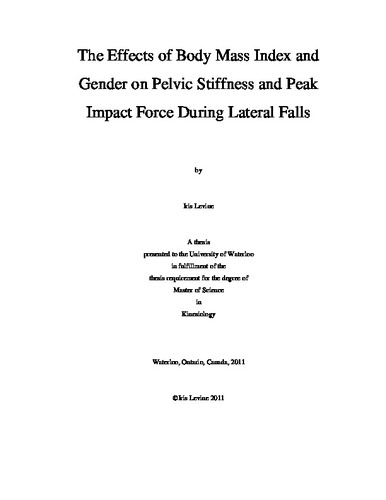 Fall-related hip fractures are a substantial public health issue. Unfortunately, little is known about whether the effective stiffness of the pelvis, a critical component governing impact force during lateral falls, differs substantially across different segments of the population. The objective of this thesis was to enhance the knowledge base surrounding pelvis impact dynamics by assessing the influence of gender and body mass index (BMI) on the effective stiffness of the pelvis, and on resulting peak loads applied to the hip, during sideways falls. Towards this end I conducted pelvis release trials (in which the pelvis was suspended and suddenly released onto a force plate) with males and females with low (<22) and high (>28) BMIs. One resonance-based (kvibe), and three force-deflection based (k1st, kcombo 300, and kcombo opt) methods of effective pelvic stiffness estimation were examined. The resulting stiffness estimates, and peak forces sustained during the pelvis release experiments, were compared between each BMI and sex group. The optimized force-deflection stiffness estimation method, kcombo opt provided the strongest fit to the experimental data. Strong main effects of BMI (f (1,13) = 10.87, p = 0.003) and sex (f (1,13) = 5.97, p = 0.022) were found for this stiffness estimation method. Additionally, a significant BMI-sex interaction was observed (f (3,6) = 5.31, p = 0.030), with low BMI males having much higher stiffness estimates than any other group. Normalized peak forces were higher in low BMI participants than in high BMI participants (f(1,13)=24.9, p<0.001). Linear regression demonstrated that peak impact force was positively associated with effective pelvic stiffness (β = 0.550, t(25) = 3.110, p=0.005), height (β = 0.326, t(25) = 2.119, p=0.045) and soft tissue thickness (β = 0.785, t(25) = 4.573, p<0.001). This thesis has demonstrated that body habitus and sex have significant effects on the stiffness of the pelvis during lateral falls. These differences are likely related to a combination of soft tissue and pelvic anatomical differences between BMI and sex groups. Pelvic stiffness, along with other easily collected variables, may be helpful in predicting peak forces resulting from lateral falls in the elderly. Differences in pelvic stiffness estimates between BMI and sex groups, and estimation method, necessitate careful consideration. These data will aid in selecting the most appropriate pelvic stiffness parameters when modeling impact dynamics for higher energy falls.