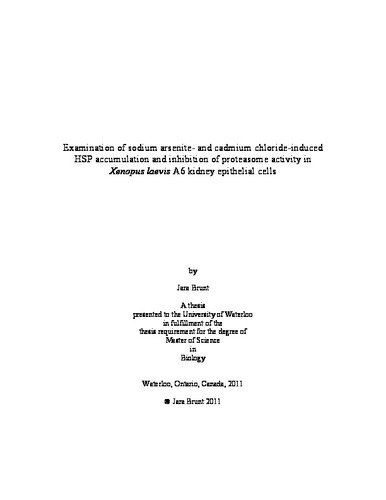 Sodium arsenite (NA) and cadmium chloride (CdCl2) are two relatively abundant environmental toxicants that have numerous detrimental effects on living organisms. At the cellular level, NA and CdCl2 produce reactive oxygen species which cause protein damage. Recent studies, in mammalian systems, have suggested that NA and CdCl2 can inhibit the ubiquitin-proteasome system (UPS). The UPS is the major degradation route for the elimination of damaged protein. This process involves two successive steps: the addition of ubiquitin to damaged protein and subsequent degradation by the 26S proteasome. Previously our laboratory determined that inhibition of the UPS can induce the accumulation of heat shock protein (HSPs) in Xenopus laevis A6 cells. HSPs are molecular chaperones, which bind to unfolded proteins to prevent aggregation and assist in protein refolding. The goal of this study was to examine the effect of NA and CdCl2 on the UPS of Xenopus laevis cells and to investigate any possible association between HSP accumulation and proteasomal activity. In the present study, treatment of A6 cells with NA or CdCl2 caused an increase in HSP30 and HSP70 accumulation, as well as in protein ubiquitination. In fact, treatment with 30 μM NA or 200 μM CdCl2 resulted in a 1.7- and 2-fold increase, respectively, in the relative levels of ubiquitinated protein compared to control. Examination of the relative levels of ubiquitinated protein over time revealed significant increases in cells treated up to at least 24 h after exposure of A6 cells with 30 μM NA or 200 μM CdCl2. To further examine the effect of NA and CdCl2 on proteasome activity, a cell-based assay measuring proteasomal chymotrypsin (CT)-like activity was employed. Treatment with 20 or 30 μM NA caused a 40 % decrease in the relative levels of chymotrypsin (CT)-like activity in A6 cells compared to control cells. The CT-like activity of A6 cells treated with 100 or 200 μM CdCl2 decreased by 40 % and 75 %, respectively, compared to control. The increase in ubiquitinated protein and a decrease in CT-like activity suggest that NA and CdCl2 can inhibit the UPS in A6 cells. In order to examine any possible association between HSP accumulation and proteasome activity an inhibitor of HSP accumulation, KNK437, was employed. In A6 cells pretreated with KNK437 followed by NA or CdCl2 exposure a decrease in the relative levels of HSP30 and HSP70 and ubiquitinated protein was noted compared to cells treated with NA alone. However, the CT-like activity of cells pretreated with KNK437 prior to NA or CdCl2 showed no significant difference compared to cells treated with NA or CdCl2 without pretreatment. The findings of this study suggest that NA and CdCl2 inhibit proteasomal activity in A6 cells and that there is a possible association between HSP accumulation and the mechanism by which damaged proteins are ubiquitinated.