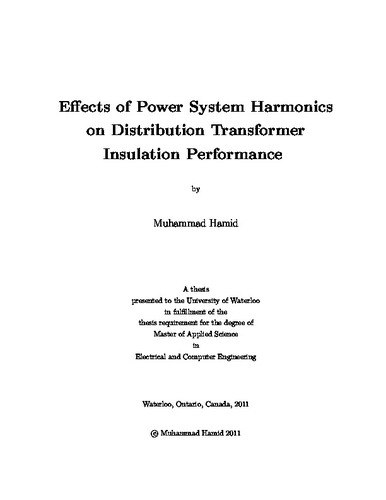 Floating feeder resonances are one of the new challenges being put forward by the renewable energy based distributed generation (DG) installations. Generally, the harmonic injection from DGs are within IEEE standard 519-1992 limits. Although the harmonics are within the IEEE limits, they are a potential threat to power equipment’s insulation system integrity due to floating feeder resonances. There is a reasonable probability that at some point in time the feeder resonant frequency may coincide with one of the injected harmonics. Such phenomenon amplifies the specific harmonic causing additional stress on the equipment’s insulation system. In this thesis a feeder resonance study is done on the IEEE 34 bus distribution feeder to show the resonance shift problem in a DG loaded distribution feeder. Electric field study is then carried out on transformer winding to assess the dependence of electric field on harmonic distortion. At first the acoustic emission (AE) technique is employed to identify the change in the electric field distribution inside the winding at higher frequency. The AE technique together with the acoustic waveguide is utilized to locate the partial discharges under power frequency and high frequency operation. The results show a change in partial discharge (PD) location, which implies that the electric field redistributes in the transformer winding at higher frequency In order to further understand the electric field distribution, a high voltage air core coil is modeled by R, L and C ladder network. The R, L and C parameters are solved by finite element method and finally the electric field is calculated by computing the node potentials in the ladder network at various frequencies. The electric field results show that at high frequency distortion the electric stress enhances between fourth and fifth layer of the winding which may give rise to a PD activity; hence degrading the insulation. An aging experiment is also performed to understand the impact of high frequency distortion on transformer paper insulation. Paper samples are taken from a field aged transformer. They are aged for 72 hours under power frequency and various distorted waveforms. Dissipation factor is used as a comparison tool for paper samples before and after aging. Results show that paper samples aged under distorted waveforms showed a double increase in dissipation factor compared to the samples aged under power frequency.