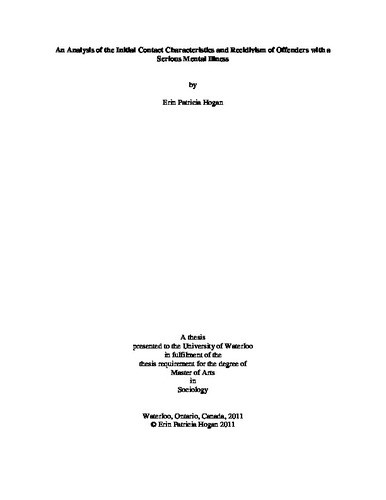 This thesis addresses the growing number of inmates with a mental illness in correctional facilities in Canada which continues to attract public attention and concern. Several explanations have been put forward to explain the rise in the number of inmates with a mental illness. These include: the deinstitutionalization of the mentally ill that began in the 1970’s, lack of treatment availability for those released into the community, and criminalization of persons with a mental illness by the justice system. The increasing numbers of persons with a mental illness in the correctional system has led to serious concerns about the capacity of this system to manage, treat, and rehabilitate individuals with a mental illness. Lack of proper treatment, management, rehabilitation and monitored discharge means that inmates with serious mental illness are more likely to come into contact with the criminal justice system more frequently. This thesis examines the incidence seriously mentally ill offenders and their propensity to recontact. Three hundred and ninety eight face-to-face assessments were conducted using the Resident Assessment Instrument-Mental Health 2.0 (RAI-MH) and from total scores from the Level of Service Inventory Ontario Revision (LSI-OR). These assessments were conducted in 14 Ontario Provincial Correctional facilities during the years 2005-2008. Bivariate and multivariate regression analysis was conducted to assess recontact rates for serious mentally disordered and non-mentally disordered offenders. With regards to recontact, no differences were revealed between the seriously mentally ill offender and non-mentally ill offender. This null finding on recontact is very surprising given the current literature on the seriously mentally ill. An additional finding revealed that for offenders with or without a serious mental illness, having a higher score on the scale of criminogenic tendencies (LSI-OR) increased rates for recontact. Another surprising finding is that seriously mentally ill offenders were more likely to commit minor crimes upon release, rather than violent crimes as current literature suggests. A more accurate research tool, as well as a larger sample size, will be required to assess the validity of these results. The implications of the negative outcome with respect to recontact and issues of identifiable risk factors for recidivism for both seriously mentally ill and non-mentally ill inmate populations are discussed in relation to outcomes in terms of both improvements to Corrections policy and theories of criminology. It is important to continue research in this area, to determine the true gravity of the incidence and recontact rates of mentally ill offenders.

Erin Patricia Hogan (2011). An Analysis of the Initial Contact Characteristics and Recidivism of Offenders with a Serious Mental Illness. UWSpace. http://hdl.handle.net/10012/6276