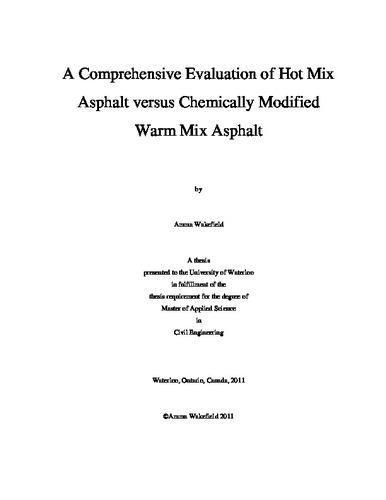 Warm mix asphalt (WMA) technology has now been successfully used in Ontario for a few years. This shift in usage relates to extensions in construction season, reduced emissions, larger compaction windows, and potential fuel savings. This research between Miller Paving Ltd. and the Centre for Pavement and Transportation Technology attempts to better quantify the difference in hot mix asphalt (HMA) and WMA. The object of this study was three-fold. The first part of the research was to examine the strength characteristics of HMA and WMA as a function of storage time. The purpose of this evaluation was to quantify indirect tensile strength (ITS) and moisture susceptibility of HMA and WMA over time. The second objective involved evaluating the performance characteristics of HMA and WMA. Resilient modulus and dynamic modulus testing were completed on plant-produced HMA and WMA material, which was used to determine long-term performance properties of both mixes. The third and final objective of this study was an economic analysis performed to determine the difference in cost for construction and maintenance for the HMA and WMA pavements. This was completed to determine if the cost of the warm mix technology used in the production of the WMA was offset by fuel savings at the plant. The findings of the research included: • HMA and WMA had statistically equivalent air voids over a four-week storage period. • Dry and wet ITS results for the WMA increased over a four-week storage period while the HMA specimens did not show this same increase. • WMA material had slightly better workability than the HMA material although the values were statistically equivalent. • WMA mix had higher resilient modulus values than the HMA mix. • Dynamic modulus testing showed that at high temperatures, WMA showed to be slightly more susceptible to rutting than the HMA mix, and at lower temperatures, the HMA showed to be slightly more susceptible to fatigue cracking than the WMA mix. • The MEPDG showed that both the HMA and WMA pavements were deemed to be structurally adequate. • An economic analysis of the HMA and WMA pavements compared a life cycle cost analysis over a 20-year design life which included all costs associated with construction, maintenance, and rehabilitation of both the HMA and WMA and showed that the HMA was slightly more cost effective than the WMA. • A field trial was performed by Miller Paving Limited on Highway 62 in Madoc, Ontario showed that the WMA material was more effective at maintaining the temperature of the asphalt mixture during long hauling distances. • Overall the WMA exhibited the same performance properties as the HMA.