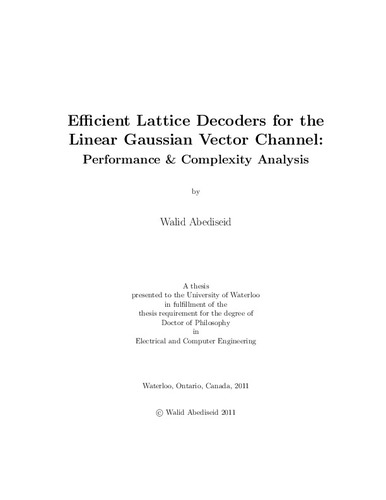 The theory of lattices --- a mathematical approach for representing infinite discrete points in Euclidean space, has become a powerful tool to analyze many point-to-point digital and wireless communication systems, particularly, communication systems that can be well-described by the linear Gaussian vector channel model. This is mainly due to the three facts about channel codes constructed using lattices: they have simple structure, their ability to achieve the fundamental limits (the capacity) of the channel, and most importantly, they can be decoded using efficient decoders called lattice decoders. Since its introduction to multiple-input multiple-output (MIMO) wireless communication systems, sphere decoders has become an attractive efficient implementation of lattice decoders, especially for small signal dimensions and/or moderate to large signal-to-noise ratios (SNRs). In the first part of this dissertation, we consider sphere decoding algorithms that describe lattice decoding. The exact complexity analysis of the basic sphere decoder for general space-time codes applied to MIMO wireless channel is known to be difficult. Characterizing and understanding the complexity distribution is important, especially when the sphere decoder is used under practically relevant runtime constraints. In this work, we shed the light on the (average) computational complexity of sphere decoding for the quasi-static, LAttice Space-Time (LAST) coded MIMO channel. Sphere decoders are only efficient in the high SNR regime and low signal dimensions, and exhibits exponential (average) complexity for low-to-moderate SNR and large signal dimensions. On the other extreme, linear and non-linear receivers such as minimum mean-square error (MMSE), and MMSE decision-feedback equalization (DFE) are considered attractive alternatives to sphere decoders in MIMO channels. Unfortunately, the very low decoding complexity advantage that these decoders can provide comes at the expense of poor performance, especially for large signal dimensions. The problem of designing low complexity receivers for the MIMO channel that achieve near-optimal performance is considered a challenging problem and has driven much research in the past years. The problem can solved through the use of lattice sequential decoding that is capable of bridging the gap between sphere decoders and low complexity linear decoders (e.g., MMSE-DFE decoder). In the second part of this thesis, the asymptotic performance of the lattice sequential decoder for LAST coded MIMO channel is analyzed. We determine the rates achievable by lattice coding and sequential decoding applied to such a channel. The diversity-multiplexing tradeoff under such a decoder is derived as a function of its parameter--- the bias term. In this work, we analyze both the computational complexity distribution and the average complexity of such a decoder in the high SNR regime. We show that there exists a cut-off multiplexing gain for which the average computational complexity of the decoder remains bounded. Our analysis reveals that there exists a finite probability that the number of computations performed by the decoder may become excessive, even at high SNR, during high channel noise. This probability is usually referred to as the probability of a decoding failure. Such probability limits the performance of the lattice sequential decoder, especially for a one-way communication system. For a two-way communication system, such as in MIMO Automatic Repeat reQuest (ARQ) system, the feedback channel can be used to eliminate the decoding failure probability. In this work, we modify the lattice sequential decoder for the MIMO ARQ channel, to predict in advance the occurrence of decoding failure to avoid wasting the time trying to decode the message. This would result in a huge saving in decoding complexity. In particular, we will study the throughput-performance-complexity tradeoffs in sequential decoding algorithms and the effect of preprocessing and termination strategies. We show, analytically and via simulation, that using the lattice sequential decoder that implements a simple yet efficient time-out algorithm for joint error detection and correction, the optimal tradeoff of the MIMO ARQ channel can be achieved with significant reduction in decoding complexity.