Meaningful design in a multicultural community. A case study on multi-functional urban parks. 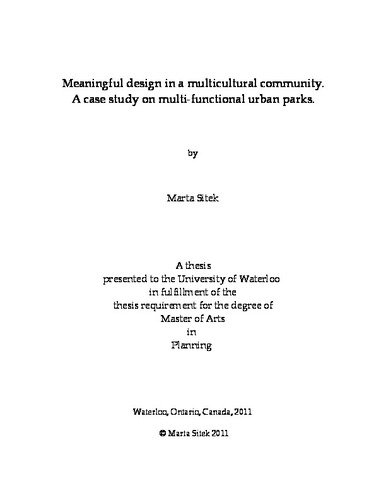 Urban planning is responsible for the arrangement of environments that we are living in as well as for the design of urban parks that allow us to escape from everyday stressors. However, we no longer live in culturally homogenous societies, and people of different backgrounds seem to have different perspectives on urban park aesthetics as well as the range of facilities and features that parks should provide. This study focuses on preferences and perspectives that people of different cultural backgrounds have of urban parks. This research was based on a single-case study of a multi-functional park – Waterloo Park, located in Kitchener-Waterloo (Ontario, Canada), and was focused on investigating urban park preferences of seven ethnic groups: Caucasian Canadians, East and North Asians, South Asians, Middle- Eastern, Arabic, African/Caribbean and African/Zimbabwean or Kenyan. The feedback obtained from face-to-face interviews with Waterloo-Park users have been analyzed in order to establish how do people of different cultural backgrounds conceptualize urban parks and what their breadth of needs are when utilizing park space. Demographic information, such as ethnic association, was obtained from the participants on a self-descriptive basis. Findings from this study indicates that there are apparent differences in expectations and needs that culturally diverse users have regarding urban parks, and provides substantial evidence that culture plays an influential role in perception and evaluation of urban parks. Recommendations for professional practice advocate shifting Canadian design practices towards a true comprehensive and multifunctional park design and incorporating the various motives and needs of a culturally diverse Canadian society.