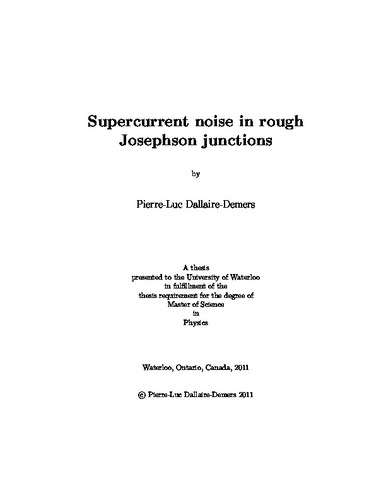 Josephson junctions are dissipationless elements used notably in superconducting nanocircuits. While being indispensable for the making of superconducting quantum bits, they are plagued by intrinsic noise mechanisms that reduce the coherence time of the quantum devices. An important source of such fluctuations may come from the non-cristallinity and disorder of the oxide layer sandwiched between the two superconducting leads. In this work, roughness in a Josephson junction is modeled as a set of pinholes with a universal bimodal distribution of transmission eigenvalues that sum incoherently in the noise power. Each of these channels is treated as a ballistic quantum point contact with a thin barrier that determines the transmission eigenvalue. The noise spectrum is calculated using the quasiclassical Green's function method to analyze high and low transmission limits at non-zero temperature for all interesting frequencies. As suggested by experiments, low transmission channels generate shot noise while fast switching between subgap states creates strong non-poissonian low-frequency noise. However, when analyzed for three different universal models of disorder, the principal contribution to noise is found to come from the partially opened channels. Finally, fluctuations of the noise from sample to sample is seen to be dominated by the contribution of opened channels which may reduce the reproducibility of results between different experiments.