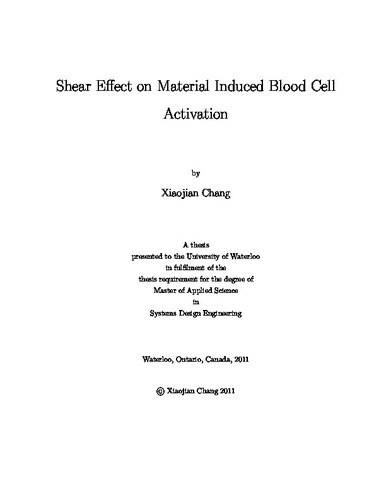 Restenosis that occurs after stent implantation is a great threat to the quality of life of patients with coronary artery diseases. Studies on thrombosis have revealed that platelet is a primary component of blood clots, and leukocytes and other plasma proteins also contribute to thrombus formation. However, the mechanism of material-induced activation, especially with metallic materials, is currently not well understood and the effect of blood flow on material-induced blood cell activation has not been well characterized. In vitro static and flow experiments were performed to assess the effect of flow on blood cell activation. Blood was taken from healthy donors. Two common stent metals, ST316L and TiAl6V4, were used as test materials. In static experiments, blood was incubated with metal disks at 37 ℃ for two hours. In flow experiments, blood was circulated in flow chambers preloaded with or without metal wires at shear rates of 100 s-1, 500 s-1, and 1500 s-1. Platelet and leukocyte activation, leukocyte-platelet aggregation, and tissue factor expression on monocytes were measured by using a three-color FACSCalibur flow cytometer. Fibrin deposition and blood cell adhesion on metal surfaces were evaluated by scanning electron microscopy (SEM). The results indicate that platelet and leukocyte activation under static condition was low. TiAl6V4 metal disk induced relative lower platelet and leukocyte activation, albeit no significant difference was found between control groups and the two metals tested. Shear stress significantly enhanced platelet activation as measured by an increase in platelet microparticle formation and platelet receptor CD61 expression. CD11b up-regulation, leukocyte-platelet aggregates, and tissue factor (TF) expression increased at 100 s-1. However as shear rate increased, lower leukocyte activation was observed. TiAl6V4-induced leukocyte activation was generally lower than that of ST316L. Significant fibrin deposition and blood cell adhesion were observed on metal surfaces under static condition and with shear rate of 500 s-1. Adhesion significantly decreased with increasing shear rate to 1500 s-1. The flow cytometry analysis results and SEM images demonstrated that materials with different surface properties can induce different blood cell activation and adhesion after incubation with blood. While shear may have an effect on blood cell activation, the effect of biomaterials on cell activation under physiological shear conditions remains unclear. Further studies are required to determine if an increase in biomaterial surface area will provide some answers into the mechanisms of material-induced blood activation in the presence of flow.