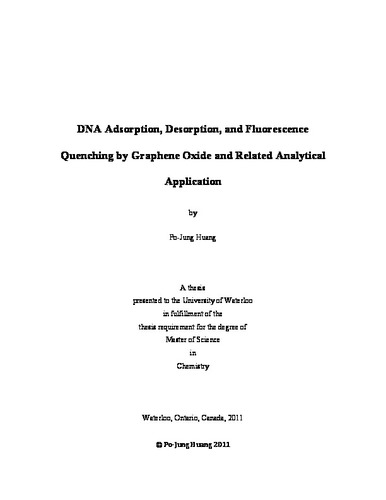 Graphene is a single layer of graphite with many unique mechanical, electrical, and optical properties. In addition, graphene is also known to adsorb wide range of biomolecules including single-stranded DNA. On the other hand, the adsorption of double-stranded DNA was much weaker. To properly disperse in water, graphene oxide (GO) is often used due to its oxygen-containing groups on the surface. Recently, it was discovered that it could efficiently quench the fluorescence of fluorophores that were adsorbed. With these properties, it is possible to prepare DNA-based optical sensors using GO. Majority of the DNA/GO-based fluorescent sensors reported so far were relied on the complete desorption of DNA probes. Even though all these reports demonstrated the sensitivity and selectivity of the system, the fundamentals of binding between DNA and GO were hardly addressed. Understanding and controlling binding between biomolecules and inorganic materials is very important in biosensor development. In this thesis, adsorption and desorption of DNA on the GO surface under different buffer conditions including ionic strength, pH, and temperature were systematically evaluated. For instance, adsorption is favored in a lower pH and a higher ionic strength buffer. It was found that once a DNA was adsorbed on the surface, little desorption occurred even in low salt buffers. Even with high pH or temperature, only small percentage of adsorbed DNA can be desorbed. To completely desorb the DNA, complementary DNA is required. The energies and activation energies associated with DNA adsorption/desorption were measured and molecular pictures of these processes were obtained. With the fundamental understanding of the DNA/GO interaction, we demonstrated that it is possible to achieve sensor regeneration without covalent immobilization. In addition, we also achieved the separation of double-stranded DNAs from single-stranded ones without using gel electrophoresis. We also studied the fluorescence property of DNA near the GO surface using covalently attached DNA probes. It was found that the fluorophore quantum yield and lifetime changed as a function of DNA length. This study is important for rational design of covalently linked DNA sensors. This study confirmed that fluorescence quenching by GO occurs in a distance-dependent manner. Energy transfer occurred between the fluorophore and GO to result in reduced quantum yield, shorter lifetime, and lower fluorescence intensity. Although fluorescent sensors based on covalently attached DNA probes on GO have not yet been reported, the study presented here clearly supported its feasibility.