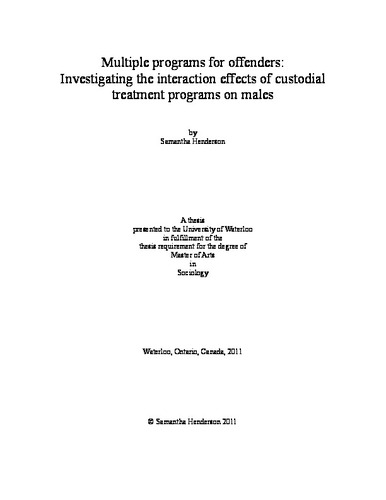 Many offenders participate in multiple treatment programs while incarcerated. Despite this, few studies have investigated the possibility of interactions between programs, and instead the correctional discourse has focused on assessing programs individually. However, it is likely that combinations of programs work together to affect offenders’ post-release performance in ways that cannot be predicted by the sum of their main effects alone. The current study uses logistic regression analysis to investigate the presence of interaction effects between custodial treatment programs in Canadian federal prison. It uses a population sample of 17,727 male offenders admitted to prison between January 1st, 2002 and December 31st, 2006, and released into the community on Day Parole or Statutory Release on or before December 31st, 2009. Findings of the study suggest that certain program combinations reduce the odds of post-release recidivism more than others, but effective programming differs depending on whether an offender has substance abuse needs. Furthermore, the number of successfully completed correctional programs raises an offender’s odds of post-release success, regardless of the content of the program.