The Education of Demea in Terence’s Adelphi 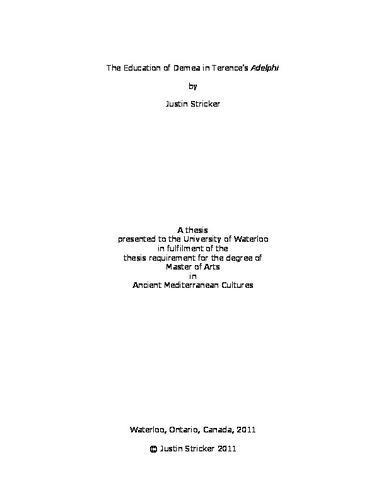 The aim of this thesis was to gather an in-depth understanding of the changes in the role of the Roman father during the Middle Roman Republic by analyzing a play called The Adelphi by Terence. A literature review was conducted to highlight the divergent views on Roman and Greek education and fatherhood, and its application in Rome. When Rome came into contact with Greece in 241BC, controversy was sparked on how a Roman father should raise his sons. This conflict arose because Greek fathers tended to raise sons with kindness, fairness, and equity in contrast to the heavily traditional, stern, strict, and restrictive methods of Roman fathers. There was a recent debate among modern scholars on this topic; however, it has generally been agreed that the Roman father was no longer a cold and overcontrolling paternal figure in Middle Republic. Because of the scarcity of primary sources dating before the first century BCE, Terence's Adelphi is a valuable piece of evidence for understanding the 2nd Century BCE controversy that arose between those for and against all things Greek: philosophy, art, literature, mores, cultural norms and education. In his play, Terence contemplates this issue and concludes by presenting an ideal father as possessing a balance of both Roman conventional morals and paternal authority, and Greek kindness and fairness to foster affection and respect among family members. This is evident when the protagonist, the heavily traditional Roman father, Demea, initially having alienated his sons, changes his behaviour after adopting these Greek characteristics to earn back both his sons’ affection. The importance of this conclusion to the play suggests that Greek Philosophy and cultural mores began to influence Roman fatherhood and education as early as 160 BCE when the play was produced posthumously in Rome. More specifically, Terence’s play was one of the first social plays to impact Roman society by portraying an ideal image of a shofter, and gentler Roman father, who did not solely rely on the absolute power and control he possessed over his sons. Although there is primary evidence in literary works to support that the Adelphi continued to gain popularity in first century BCE with its Greek concepts of kindness, fairness, and equity in fatherhood and education, future archeological research of Roman family tombstones in Rome may further shed light on the issue concerning the extent to which Greek philosophy and mores influenced and impacted Roman society in the 2nd Century BCE.