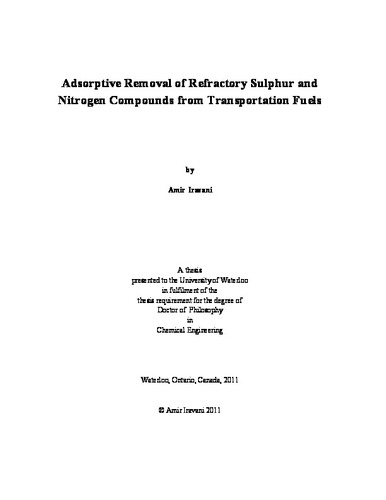 The reduction of sulphur in transportation fuel has gained significant importance as the regulatory agencies worldwide react to air quality concerns and the impact of sulphur oxides on the environment. The overall objective of this research was to identify, develop and characterize, based on underlying scientific principles, sorbents that are effective in removal of refractory sulphur compounds from fuel through the process of selective adsorption. It was determined that impregnation of powdered activated carbon with a transition metal (TM) significantly boosted the adsorption performance of the activated carbon. It is hypothesized that the impregnation resulted in the formation of new adsorptive sites that strongly interacted with the lone pairs of electrons on sulphur and nitrogen while having minor impact on the existing oxygen functional groups on the surface of the activated carbon. The percent loading of the TM was determined through wet adsorption study. The best performing sorbent was shown to have maximum adsorption capacities of approximately 1.77 and 0.76 mmol-S/g-sorbent for DBT and 4,6 DMDBT, respectively, with approximately 100% regenerability through solvent wash and thermal treatment. On average, the PTM impregnation showed approximately 137% increase in adsorption capacity of the activated carbon. The sorbent also has good adsorption capacities for organo-nitrogen compounds (i.e., quinoline and carbazole) and a low selectivity towards aromatics, which is desired in adsorptive desulphurization. The surface morphology of the activated carbon, the oxygen functional groups on the surface of the activated carbon, as well as strong (chemisorption) interaction between the TM’s partly vacant and far reaching ‘d’ orbital and lone pair electrons on sulphur and nitrogen are considered to be the main contributing factors to the observed enhancement. It was established in this study that the adsorption isotherms of the impregnated activated carbons best fit Sips isotherm equation, which is a combination of the Langmuir and Freundlich equations. This finding fits well with our initial hypothesis regarding the introduction of new adsorptive sites as a result of TM impregnation and that the sites did not fit well with Langmuir’s monolayer and uniform adsorption mechanism. A kinetic study of the sulphur adsorption using a flow reactor showed a good fit with pseudo second order kinetic model, indicative of an adsorption that is highly dependent on the concentration of available sites on the surface of the sorbent. On average, as expected, the TM impregnated ACC exhibited a higher initial rate of adsorption. The adsorption onto TM sites tends to be more exothermic than adsorption (mainly physisorption) on activated carbon. Therefore, more thermodynamically favoured chemisorption is expected to occur more rapidly than physisorption. It was determined that on average, the initial adsorption rate does not change significantly with temperature while the sulphur adsorption capacity decreases with increase in temperature. It is postulated that the increase in temperature increases surface diffusivity but impedes diffusion flux. The impediment of the diffusion flux will result in reduction in adsorbed quantity. It was also shown that the intra-particle diffusion exists in the adsorption of DBT on TM impregnated activated carbon, however, it is not likely that the overall adsorption is controlled or noticeable impacted by it. As the temperature of the reactor increases the Weber-Morris intra-particle diffusion plot moves away from the origin, and thus intra-particle diffusion becomes less of a controlling mechanism. This further confirms the fact that the boundary layer (i.e., surface diffusion) and potentially adsorptive interactions at the surface are the dominating mechanisms in the sulphur adsorption onto TM impregnated activated carbon. It was determined that the distribution of TM species on the surface of the activated carbon is relatively inhomogeneous, with some areas showing well dispersed TM species while other areas showing large clusters. Different impregnation method that can improve dispersion on the surface may significantly enhance adsorption performance of the sorbent. Furthermore, in this study impregnation of activated carbon using several other transition metals were examined. It was determined that other less expensive transition metals can also improve the adsorption performance of the activated carbon. Further study on less expensive options for impregnating the activated carbon may be beneficial.