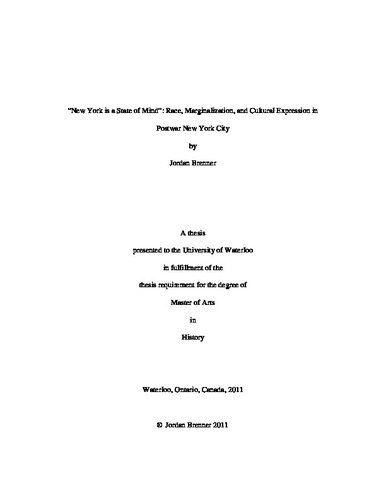 While the urban crisis debate has expanded to examine a variety of American cities, the general exploration of how African Americans have responded to, and challenged, racial and urban inequality remains focused on grassroots political and community activism. This account of postwar New York City seeks to examine how structural discrimination created racial inequality, how African Americans suffered from a complex system of social consequences that further marginalized them, and how a politically conscious art form emerged from the destitution of the urban crisis. As illustrated through Robert Merton’s theory of Anomie, restricted opportunity for social and economic advancement created an environment vulnerable to crime. Not only were African American neighbourhoods susceptible to crime, but the conservative agenda tended to demonize African Americans as dangerous criminals, targeting them in the rise of mass incarceration. Resources were funneled into imprisoning more people, and African Americans were disproportionately represented in the American corrections system. As a result of this, African Americans were consistently excluded from certain jobs and denied basic civil rights. This thesis will also explore how African Americans responded to, and challenged, racial and urban inequality through the arts. The Black Arts Movement emerged from New York City in the mid-1960s. The movement was both confrontational and socially conscious. Artists sought to articulate the struggles of urban African Americans while empowering, educating, and protesting racial injustices. The Black Arts Movement was fundamentally political, and a predecessor to the Hip Hop culture which emerged from the South Bronx neighborhood of New York City.