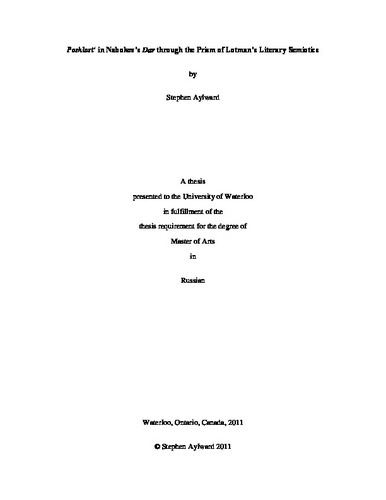 The word poshlost’ denotes the concepts of banality, vulgarity or phlistinism, and has been an intellectual and cultural obsession since the second half of the nineteenth century, lasting well into the twentieth century. Russian author Vladimir Nabokov attempted to familiarize English-speaking readers with the notion of poshlost’ in his book Nikolai Gogol (1944); it is hard to find any English-language exposition of the term that does not cite Nabokov’s vigorous elaboration of it. Moreover, it is arguably a convention in scholarship to acknowledge the relationship between poshlost’ and Nabokov’s uncompromising moral and aesthetic values. Poshlost’ has often been discussed as a theme in Nabokov’s fiction, and its bearing on Nabokov’s role as a cultural critic has often been assessed, but there are few studies that examine how the concept influences the overall composition and interpretation of his fiction. This thesis examines how poshlost’ functions as a literary device in Nabokov’s final Russian-language novel Dar (1938), which tells the story of an émigré Russian writer living in Berlin in the 1920s. I look at poshlost’ from the perspective of the theories of aesthetic innovation advanced by semiotician and cultural theorist Iurii Lotman, and within this framework I link poshlost’ with the formation and re-formation of the protagonist’s, as well as the author’s, consciousness. I consider it a relational construct rather than simply an immanent feature of the text, as it would be considered in Russian Formalist approaches. Among the topics I focus on are individuation, self-modelling and autocommunication as facets of the process of personal and creative maturation. I argue that poshlost’ serves as a means of modelling Nabokov’s aesthetics as a textual feature and is a multisignifying and a multifaceted device whose overall artistic effect depends on the conditions under which it is employed.