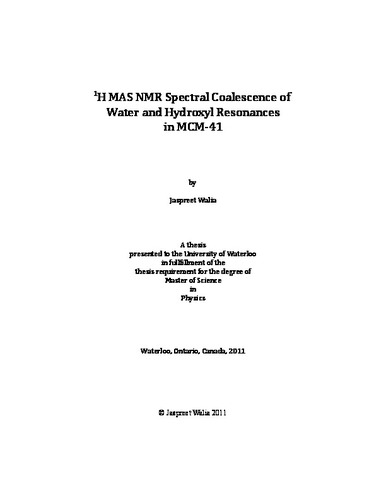 Solid state ¹H MAS NMR spectroscopy was used to investigate the temperature and hydration dependance of water and hydroxyl proton spectra of hydrated mesoporous MCM-41. The NMR spectra show a complex peak structure, with hydroxyl proton resonances seen in dry MCM-41 disappearing as water is introduced into the pores, and new peaks appearing representing water and hydrated silanol groups. Until now the assignment of these peaks was unclear and the consensus was that magnetization exchange played an important role in the coalescence of the various peaks which appear in the spectra. It was found recently that magnetization exchange is not necessary to produce the spectral featured observed [Niknam, M., M.Sc. Thesis, University of Waterloo (2010)]. In the present study a simplified model, based on chemical shift averaging by the making and breaking of hydrogen bonds as water undergoes rotational motion and translational self-diffusion on the pore surface, has been developed to explain the NMR spectral results. The model is able to reproduce the experimental ¹H MAS NMR spectra for all hydrations and temperatures studied. For the first time, definitive spectral assignments for all hydroxyl and water protons in the sample has been achieved. Spectral features arising due to temperature change have been explained by using the known result that the proton chemical shift of a hydrogen atom involved in hydrogen bonding varies linearly with temperature. Furthermore, it is reported for the first time, that with increasing hydration, water molecules begin to favour forming two hydrogen bonds to the surface. This may represent the first step in the pore filling process.