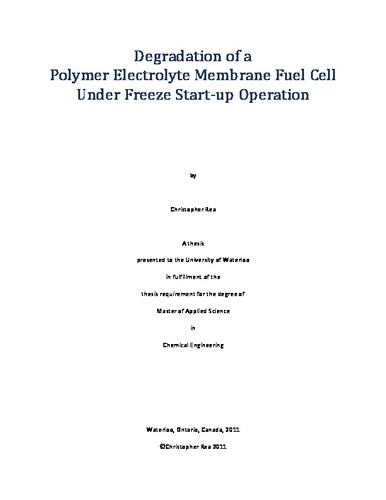 The polymer electrolyte membrane fuel cell (PEMFC) is an electrochemical device used for the production of power, which is a key for the transition towards green and renewable power delivery devices for mobile, stationary and back-up power applications. PEMFCs consume hydrogen and oxygen to produce power, water and heat. The transient start-up from sub-zero freezing temperature conditions is a problem for the successful, undamaged and unhindered operation. The generation and presence of water in the PEMFC stack in such an environment leads to the formation of ice that hinders the flow of gases, causes morphological changes in the membrane electrode assembly (MEA) leading to reversible and irreversible degradation of stack performance. Start-up performance is highly dependent on start-up operational conditions and procedures. The previous state of the stack will influence the ability to perform upon the next start-up and operation. Water generated during normal operation is vital and improves performance when properly managed. Liquid water present at shut-down can form ice and cause unwanted start-up effects. This phase change may cause damage to the MEA and gas diffusion media due to volume expansion. Removal of high water content at shutdown decreases proton conductivity which can delay start-up times. The United States Department of Energy (DOE) has established a set of criteria that will make fuel cell technology viable when attained. As specified by DOE, an 80 kWe fuel cell will be required by 2015 to reach 50% power in 30 seconds from start-up at an ambient temperature of -20°C. This work investigates freeze start-up in a multi-kilowatt stack approaching both shut-down conditioning and start-up operations to improve performance, moderate fuel cell damage and determine the limits of current stack technology. The investigation involved a Hydrogenics Corporation 5 kW 506 series fuel cell stack. The investigation is completed through conditioning the fuel cell start-up performance at various temperatures ranging from -5°C to below -20°C. The control of system start-up temperature is achieved with an environmental chamber that maintains the desired set point during dwell time and start-up. The supply gases for the experiment are conditioned at ambient stack temperature to create a realistic environment that could be experienced in colder weather climates. Temperature controls aim to maintain steady ambient temperatures during progressive start-up in order to best simulate ambient conditions. The control and operation of the fuel cell is maintained by the use of a fuel cell automated test station (FCATS™). FCATS supplies gas feeds, coolant medium and can control temperature and reactant humidity in reactants according to a prescribed procedure for continuous operation. The iv collection of data occurs by the same system recording cell voltage, temperatures, pressures, flow rates and current densities. A procedural start-up and characterization are conducted in order improve start-of performance and examine reactant flows, coolant activation time, stack conditioning and the effects by freezing temperatures. The resulting degradation is investigated by polarization curves and various ex-situ measurements. In this work, it was found that freeze start-up of a fuel cell stack can be aided and managed by conditioning the stack at shut-down and applying a procedure to successfully start-up and mitigate the damage that freezing can cause.