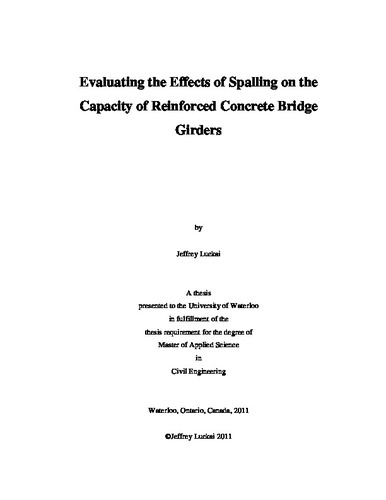 Corrosion of the reinforcing steel is a primary deterioration mechanism for reinforced concrete bridges. Heavy use of de-icing salts is believed to be a major contributor in Ontario to severe girder soffit spalling in certain cases. This thesis develops an assessment methodology to evaluate spalled bridges based on ultimate limit states. Specifically, a deterministic program is developed for assessment. It is subsequently compared to laboratory test results and used as a basis for a probabilistic reliability study. A modified area concept is proposed in this thesis to consider the effects of exposing reinforcement at various locations along the girder length. A multipoint analysis program, BEST (Bridge Evaluation Strength Tool), is developed that employs this concept, along with graphical spalling surveys and structural drawings, to evaluate reinforced concrete bridge girders. The program is adapted for a full bridge analysis and to consider the other effects of corrosion, such as bar section loss and bond deterioration. A case study bridge is evaluated to show that the BEST program offers a viable tool for the rapid assessment of spalled bridge girders and to facilitate the prioritization of rehabilitation projects. This evaluation indicates that the spatial distribution of the spalling along a girder, relative to bar splices and laps, has the most significant influence on structural capacity. Single girders show strength deficiencies in flexure and shear due to spalling. In general, the consideration of system effects improves the predicted bridge condition, while considering section loss and bond deterioration has the opposite effect. Laboratory work is used to validate the proposed model and identify a number of areas for future research. The laboratory test results also suggest that the current repair methods are effective in restoring bond and strength. In order to further explore potential uses for the BEST program, modifications are made so that it can be used to perform reliability analyses using Monte-Carlo simulation techniques. A simplified approach for estimating the reliability index as a function of the deterministic resistance ratio is proposed based on the reliability analysis results.