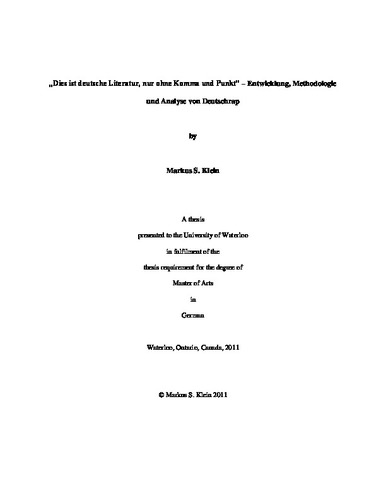 As the most recent manifestation of youth culture, hip hop culture, including rap music, has attracted attention from scholars in a broad range of fields. Most of this work, however, has originated from the English-speaking world, and focuses primarily on cultural aspects. Very little analysis of rap music texts has been performed by scholars of German literature; Severin Peters’ Romantische Lyrik und Rap-Texte als Ausdruck „progressiver Universalpoesie” (F. Schlegel) – Ein Vergleich is one of the few exceptions. Peters claims that this apparent neglect results from a lack of knowledge in the field. This thesis attempts to fill that gap. The first part of the thesis presents a brief history of the development of German rap music in three major phases: in the first (1983-1992), German rappers had to adapt the US style to different local circumstances to achieve the attempted authenticity. In the second phase (1992-2000), artists and fans formed a collective identity by exchanging knowledge at “jams,” often staged at local youth centres. This travelling among different local scenes led to the beginnings of a nation-wide German rap scene. In the third phase (2000 to the present), increasing commercialisation has helped hip hop culture and rap music become more widespread. Rather than retaining a simple collective identity, however, individual artists have become more important, and the scene is highly differentiated both regionally and in terms of commercial vs. political orientations. The development of rap music in Germany can be compared to the development from modernist to postmodernist culture: from avant-garde artists who began rapping in German and led the way for a collective youth culture, to the differentiated and more individualistic aspects of art in postmodernity and contemporary rap in Germany. The second part of the thesis presents a methodology for interpreting German rap music, based on Horst Frank’s traditional lyrical analysis. Aspects of German rap that need to be considered in such an analysis are pointed out, using examples from the rap song “Da läuft was schief” (Blumentopf). On the basis of this methodology, three contemporary German rap texts are analyzed in the third part of the thesis. The artists selected vary in style, approach and renown, to offer a representative assortment in the limited framework of the thesis. The analysis of “Rechte Dritter” (Eins Zwo) discusses the use of quotations by both DJ and rapper in order to demonstrate some of the aesthetic possibilities of rap music. “Viele Bars Parkbankblues” (Purkwa) deals with individualistic problems within the context of a pre-determined life. “3 Minuten” (Prinz Pi) uses media-images that describe youth and forms them into a critique of both media and contemporary society. All three texts vary in style as well as in content. The thesis concludes by pointing out the possibilities for German scholars to interpret contemporary German rap music. Rap is an art form with more than twenty years of history, and it deals with the problems of contemporary society. Since its texts can also be analysed in the same manner as a poem, the aesthetic qualities of the art form are obvious. This thesis aims to provide methods to analyse rap in order to point out both its importance and its potential for further studies.