What Are You Really Saying? Verbal Irony Understanding in Children with Social Anxiety Symptoms and Shy Negative Affect 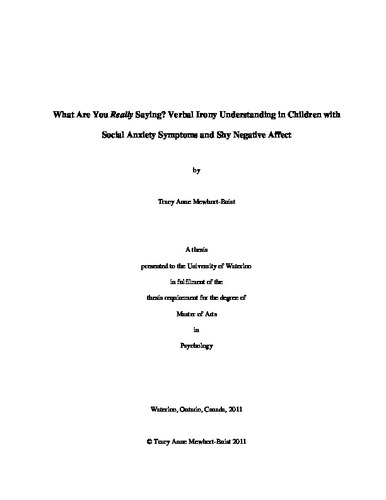 Verbal irony, a form of figurative language, uses the discrepancy between a speaker’s intended meaning and the literal word meanings to achieve social goals. Yet, little research exists on individual differences that may disrupt irony understanding. Verbal irony may challenge shy children, who tend to interpret ambiguous stimuli as being threatening, and who have difficulties with mentalizing in social contexts. This study assessed whether shy children interpret ironic statements differently than do non-shy children. Children (8- to11-year-olds) listened to stories wherein one character made a statement to another character that was a literal or ironic criticism or a literal or ironic compliment. Children appraised the speaker’s belief and communicative intention. Shyness was assessed using self report measures of social anxiety symptoms and shy negative affect. Shy children did not differ from non-shy peers in comprehending speakers’ beliefs. However, shy children rated speakers who made ironic criticisms as being more mean than did children low in shyness. Thus, while understanding that speakers intended to communicate their true beliefs, shy children construed the social meaning of irony differently, indicating difficulties with pragmatics. Such subtle differences in pragmatic understanding may underlie some of the social difficulties facing shy children.