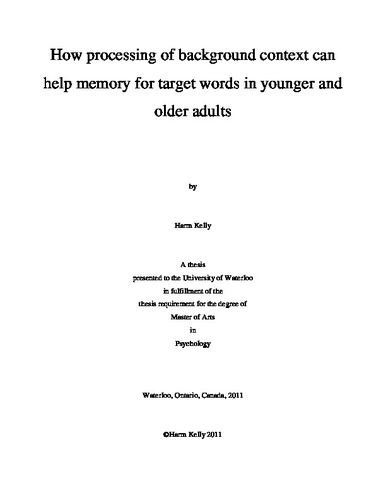 We examined how explicit instructions to encode visual context information accompanying visually-presented unrelated target words affected later recognition of the targets presented alone, in younger and older adults. In Experiments 1 and 3, neutral context scenes, and in Experiments 2 and 4, emotionally salient context scenes, were paired with target words during encoding. Experiments 1 and 2 data were collected using within subject design; in Experiments 3 and 4 we used a between subjects design. Across all four experiments, instructions to explicitly make a link (associate) between simultaneously presented context and target words always led to significantly better recognition memory in both younger and older adults compared to deep or shallow levels of processing (LoP) instructions for the context information. In all experiments the age-related deficit in overall memory remained. There was no consistent difference in the effect of a shallow versus deep processing of context in the first three experiments in young adults, although a standard LoP effect, with better memory performance following deep than shallow processing, was demonstrated with both age groups in Experiment 4. Results suggest that an instruction to explicitly link target words to context information will significantly and consistently improve memory recognition for targets. This was demonstrated in all four experiments, in both younger and older adults. Importantly, results suggest that memory in older adults can be improved with specific instructional manipulations during encoding.

Harm Kelly (2011). How Processing of Background Context Can Improve Memory for Target Words in Younger and Older Adults. UWSpace. http://hdl.handle.net/10012/6223