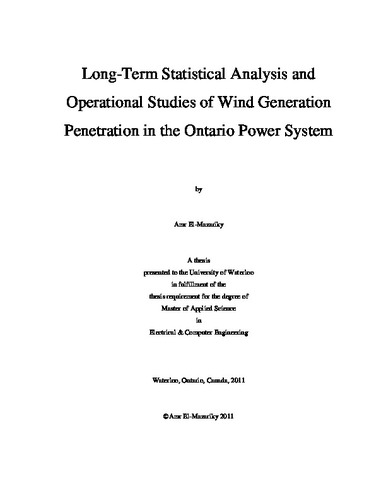 Ontario, as the rest of the world, is moving towards a clean energy sector and green economy and to this effect, the Government of Ontario has set a goal of phasing out all coal-fired generation by the end of the year 2014. Wind energy is one of the most mature renewable energy technologies; it is clean and abundant. With Canada’s wind profile and wind energy potential, Ontario has focused on increasing the wind generation penetration in its electrical grid to compensate for the phasing out of coal-fired generation. In this thesis, long-term statistical trend analysis of wind generation patterns in Ontario is carried out, using wind generation data sets of Ontario wind farms during 2007 – 2010, on hourly, monthly, seasonal, and yearly time-scales. The analysis carried out, includes, long-term total wind generation capacity factor (CF) trends on yearly, seasonal, and monthly scales. To arrive at a better understanding of the wind generation intermittency and variability in Ontario, long term wind generation variability trends are presented. The correlation between the CFs of Ontario’s wind farms is determined using the Pearson Product- Moment Correlation Coefficient and examined against their distances from one another to understand the effect of geographic diversity for wind farms on total wind generation. The electricity system demand for on- and off-peak periods is analyzed to examine the contribution of wind generation during these periods. These analyses provide critical inputs and guidelines to planners and policy makers on the role that wind can play in the supply mix of Ontario when coal-fired generating units are replaced with wind generation. Expansion of wind generation capacity requires a closer examination of the location and quality of wind resources and a detailed understanding of its operational impacts on the transmission grid. A transmission network model is further developed in the thesis, for Ontario, based on the 500 kV and 230 kV transmission corridors with their planned enhancements for the three specific years under study- 2010, 2015 and 2025. The zonal supply mix of generation resources included are, nuclear, wind, hydro, gas-fired and coal-fired generation. An optimal power flow model is developed considering the future years’ demand and generation scenarios, and used in a deterministic case study. Subsequently, Monte Carlo simulations are carried out considering the variability and uncertainty of wind generation. Both case studies examine the effect of different wind generation penetration levels on the Ontario electrical grid and analyze long-term wind generation impacts. Wind generation is characterized by its variability and uncertainty. Hence, wind penetration in the electricity grid presents major challenges to power system operators. Some of these challenges are tackled by this thesis, such as the operating reserves required for different levels of wind penetration to maintain the system’s adequacy, the operating costs as a result of wind generation’s intermittent nature, and the impact on power losses as a result of wind generation’s dependability on its location. Moreover, the associated Green-House-Gas emissions with different penetration level are determined. The results quantify the impact of the different wind generation penetration levels on the Ontario’s power system.