Midwives, Medicine, and the Reproductive Female Body in Manosque, 1289-1500 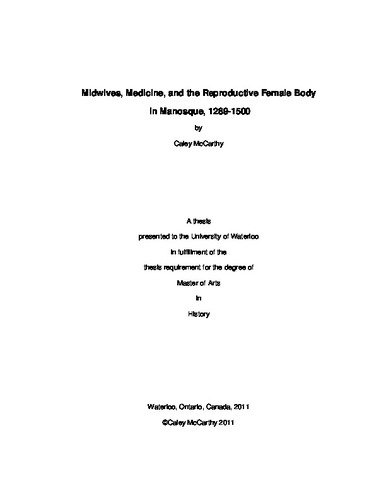 This paper examines midwives and their practice in the criminal and notarial records from the later-medieval Provencal town of Manosque. This town counted amongst its 5,000 Jewish and Christian inhabitants a relatively high number of medical practitioners; these practitioners appeared frequently in the criminal court to offer testimony and to petition for professional protection. Although the apparent absence in Manosque of midwifery regulation like that present in northern France makes it more difficult to define midwives’ exact responsibilities, their appearance in court alongside other medical practitioners suggests that they possessed an acknowledged expertise of the reproductive female body. This paper situates midwives within the socio-medical milieu from which they are often separated in current historiography. A consideration of cases involving women’s reproductive bodies within the broader context of Manosquin medicine reveals that gender dictated the production and application of knowledge about this subject, but not on the grounds of biological essentialism. Rather, as cases of conception, abortion, and postmortem caeasarean sections reveal, the masculinized professionalism of later-medieval medicine granted male practitioners increasing authority in the realms of reproduction and pregnancy. Although this granted men access to “women’s secrets,” prevailing notions of feminine propriety prevented their theoretical knowledge from transforming into practical application to, or examination of, women’s “secret places.” This placed uncomplicated childbirth, and its attendants, on the margins of the medieval medical. It also made midwives indispensible not only to the women whom she attended in childbirth, but also to the institutions that sought to extend their authority over these concerns to which society otherwise denied them access. The cases from Manosque of adultery, illegitimate pregnancy, and virginity in which midwives appear reveal that the concept of feminine propriety simultaneously granted midwives’ authority over women’s physical reproductive bodies and rendered them instruments in the courts regulation of the female body. These cases, then, illustrate the court’s ability to legitimate and regulate through a symbiotic relationship between institution and society.