Vertical Urbanity: Urban Dwelling in an Age of Programmatic Promiscuity 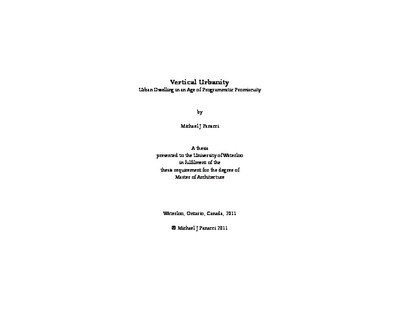 Welcome to CityPlace. Thirty-five hectares of formerly unoccupied rail-lands in downtown Toronto are currently undergoing a transformation into an instant neighbourhood. Eventually, CityPlace will be the home to over 15,000 people within 23 buildings, sequestered by the Gardiner Expressway on its southern border and by the still functioning rail-lines on its northern border, it is truly an island of suburban stacked living which is at once surrounded and yet at a distance from downtown Toronto. In CityPlace we are witnessing what the Belgian philosopher Lieven De Cauter describes as the rise of the capsular civilization. Impossible to ignore, condominiums have become the dominant form of new housing in the city of Toronto; a process that has been driven by demographics, political imperative and most of all by the pursuit of profits in the high-stakes game of real-estate development. But lost in this torrent of development is a genuine dialogue about the city we are building. This thesis explores the current state of condo development in downtown Toronto; from the myriad of political, economic and physical factors that have led to Toronto’s vernacular condo typology to the marketing onslaught that targets the base consumerist hyper-individual within all of us and aims to hide the fact that these buildings are more similar than distinct. From the optimistic aims of a city council which seeks to achieve civic benefits from increased density, to the cynical de urbanizing and social polarization that the type typically brings into the downtown. The thesis explores the promise of downtown condominium living and the hybridisation of programme that accompanies the rising real estate values of the downtown core. Programmatic promiscuity and complexity are exploited to bring different user-types from the outside city into the tower. With its unique vertical properties and inherent density, the residential high-rise tower presents new opportunities for urban collective spaces. From introvert to extrovert, the new condo becomes a catalyst for urbanity in the instant neighbourhood of CityPlace.