Conflict detection in dual-process theory: Are we good at detecting when we are biased at decision making? 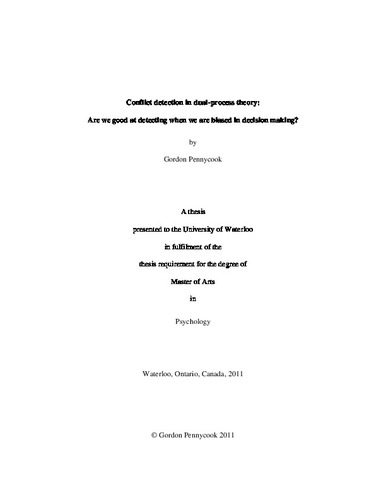 In the domain of reasoning and decision making, some dual-process theorists have suggested that people are highly efficient at detecting conflicting outputs engendered by competing intuitive and analytic processes (De Neys & Glumicic, 2008; De Neys, Vartanian & Goel, 2008). For example, De Neys and Glumicic (2008) demonstrated that participants’ reason longer about problems that are characterized by a conflict between a stereotypical personality description and a base-rate probability of group membership. Crucially, this increase occurred even when participants gave the nominally erroneous stereotypical response (i.e., “neglecting” the base-rate probability), indicating that their participants detected that there was a conflict and, as a result, engaged in slow, analytic processing to resolve it. However, this finding, and much of the additional support for the efficient conflict detection hypothesis, has come from base-rate neglect problems constructed with probabilities (e.g., 995 doctors and 5 nurses) that were much more extreme than typically used in studies of base-rate neglect. I varied the base-rate probabilities over five experiments and compared participants’ response time for conflict problems with non-conflict problems. It was demonstrated that the integral increase in response time for stereotypical responses to conflict problems was fully mediated by extreme probabilities. I conclude that humans are not as efficient at detecting when they are engaging in biased reasoning as De Neys and colleagues have claimed.

Gordon Robert Pennycook (2011). Conflict detection in dual-process theory: Are we good at detecting when we are biased at decision making?. UWSpace. http://hdl.handle.net/10012/6197