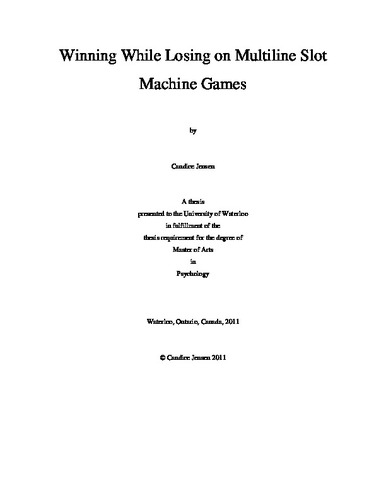 On multiline slot machine games, small “wins” often amount to less than the spin wager, resulting in a monetary loss to the gambler. Nevertheless, these monetary losses are still accompanied by “winning” (and potentially reinforcing) audio-visual feedback. Dixon, Harrigan, Sandhu, Collins, and Fugelsang (2010) termed these potentially reinforcing losses as losses disguised as wins, or LDWs. Dixon et al. previously showed that novice gamblers appear to somatically miscategorize LDWs as wins rather than correctly categorizing these outcomes as losses. Two studies are presented which investigated whether novice gamblers would psychologically miscategorize LDWs as wins as well. In both studies, we investigated participants’ categorizations of LDWs using two measures. First, we asked participants to recall how many times they had won during a playing session and predicted that if participants miscategorize LDWs as wins, then they should conflate LDWs and wins in memory. In Study 1, participants played 200 spins on a real slot machine game with either relatively fewer or relatively many expected LDWs. We found that participants who experienced more LDWs during the playing session recalled winning significantly more often than participants who experienced fewer LDWs, despite how many actual wins the participant experienced, or how much they won or lost overall. In Study 2, we found that participants recalled winning significantly more often in simulator games with more rather than fewer LDWs, despite identical numbers of real wins and identical payback percentages in both games. We referred to this type of memory error as the LDW overestimation effect. The second measure we used to investigate participants’ categorizations of LDWs was more immediate and direct. We evaluated whether participants would miscategorize LDWs as wins or correctly categorize these outcomes as losses by simply asking them to verbally label slot machine spin outcomes. In both studies, we found that the majority of participants miscategorized LDWs as wins rather than correctly categorizing the outcomes as losses. Implications for problem gambling are discussed.