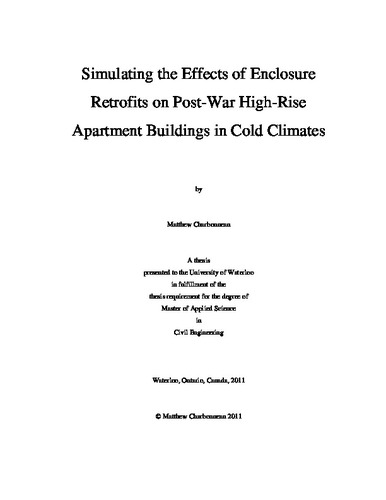 A large portion of the existing building stock in North America is comprised of post-World War II high-rise apartment buildings, particularly in the Greater Golden Horseshoe in Ontario. They are home to a large portion of the Canadian population. These buildings are nearly 50 years old and reaching the end of their useful lifespan. Significant deterioration has lead to life safety concerns, poor standards of living, and aesthetic degradation. They also consume a significant amount of energy resulting in contributing to Canada’s high per capita greenhouse gas emissions. This thesis investigates the impact of various retrofit strategies on the energy consumption, durability, and occupant comfort of the towers. The building enclosure is the primary focus. The impacts were analyzed using three approaches. Whole building energy consumption was simulated by adapting a spreadsheet based Building Energy and Loads Analysis (BELA) model, originally intended for office buildings. Heat flow and temperatures across the enclosures were modeled using a two-dimensional finite element model (Therm 5.2). A single, theoretical building dubbed the, “Archetype”, was developed to define the characteristics of a “typical” tower using details extracted from four sets of drawings for towers built in Toronto during the late 1960s. Various quantities and configurations of thermal insulation were added to the Archetype and the resulting effective thermal resistances were modeled. Adding insulation to the interior significantly reduces the effectiveness of any added thermal resistance. Insulating on the exterior allows the insulation around the balconies to reach 80% of its rated value, even without insulating the balconies. Energy efficiency measures (EEMs) including retrofitting the walls, windows, appliances, or HVAC equipment were simulated and it was found that each on its own did not have a major impact on annual energy consumption. Packages of EEMs were created and simulated. It was found that a basic and high-performance whole building retrofit packages would save approximately 40% and 55% of the annual energy consumption, respectively, based on the Archetype. An analysis and discussion of the enclosure retrofit impacts on freeze-thaw potential, interior surface and interstitial condensation, occupants’ thermal comfort, and passive thermal comfort was completed. An interior versus exterior enclosure retrofit comparison summary illustrated that an exterior enclosure retrofit has significant benefits relative to an interior retrofit including ease of construction, greater durability, and improved comfort. The difference in annual energy reduction between an interior and exterior enclosure retrofit was small.