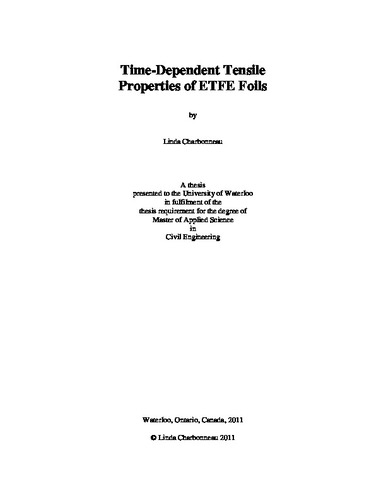 The purpose of this thesis is to provide an overview of ETFE foil, as it applies to pneumatic cushion cladding, with a focus on creep behavior of the material. Characteristics of ETFE, including weight, optics, insulation, flexibility, environmental properties, fire performance, cushion span and other features are discussed, and, where possible, are compared to the characteristics of glass panels used in similar applications. Relevant chemical and mechanical properties of ETFE are given. Load carrying concepts of tension structures and inflated cushions are discussed, as well as structural design methods for ETFE cushions. Several prominent structures constructed using ETFE foil are introduced and benefits and design issues associated with these structures are reviewed. When used in cushion applications, ETFE films are placed in constant tension, and are therefore subject to creep. Quantifying this creep is desirable so that it can be predicted during the design phase. Therefore, this thesis summarizes the findings of other researchers in the area of creep of ETFE as well as the general mechanical behavior of the material, and presents the results of uniaxial creep tests done for the purpose of this study. These tests included 24 hour uniaxial creep tests done at four stress levels on both the transverse and longitudinal directions of three different brands of film. Two thicknesses of the third film were acquired and both were tested. The stress levels were chosen to coincide with typical design tensile stresses for ETFE film, and to be similar to the levels tested by other researchers. The effects of the different stresses, brands, directions and thicknesses are evaluated and discussed. Three seven day creep tests were also done on one of the films, each at a different stress level. Constitutive viscoelastic and viscoplastic models were developed to represent the 24-hour creep data. The viscoelastic models were based on a four-element Kelvin model and the viscoplastic models were based on a power-law model. The model parameters were determined from the data using linear least squares fitting. Models were also developed for the seven day creep data. Several of these models were based only upon the first 24 hours of data, and were used to determine the applicability of the 24-hour creep models to long-term behavior. It was found that while a viscoelastic model appears to fit long-term creep most closely, the 24-hour models are inadequate for modeling longer time frames. Another method is required for predicting long-term creep. Nonlinear fitting of the parameters is recommended as a possible alternative for creating more accurate models. Longer-term creep tests are also recommended. Tensile tests were also done on the films to confirm mechanical properties supplied by the film manufacturers. Good agreement to the given values was found in the test data.