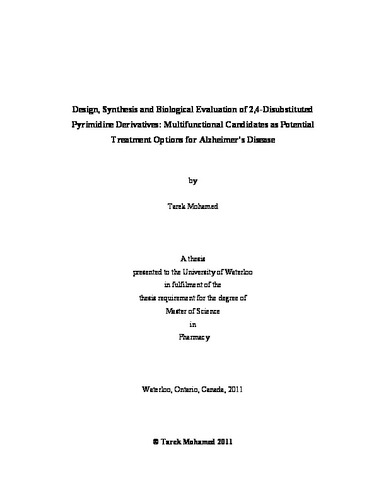 Alzheimer’s disease (AD) is a highly complex and rapidly progressive neurodegenerative disorder characterized by the systemic collapse of cognitive function and formation of dense amyloid-β (Aβ) plaques and neurofibrillary tangles (NFTs). AD pathology is derived from the cholinergic, amyloid and tau hypotheses, respectively. Current pharmacotherapy with known anti-cholinesterases, such as Aricept ® and Exelon ®, only offer symptomatic relief without any disease-modifying effects (DMEs). It is now clear that in order to prevent the rapid progression of AD, new therapeutic treatments should target multiple AD pathways as opposed to the traditional “one drug, one target” approach. This research project employed medicinal chemistry tools to develop multifunctional small organic molecules against three key targets of AD pathology – the cholinesterases (AChE and BuChE), AChE-induced and self-induced Aβ1-40 aggregation and generation (β-secretase). A chemical library composed of 112 derivatives was generated to gather structure-activity relationship (SAR) data. The derivatives were based on a novel, non-fused, 2,4-disubstituted pyrimidine ring (2,4-DPR) template with substituents at the C-2 and C-4 position varying in size, steric and electronic properties. Molecular modeling was utilized to investigate their binding modes within the target enzymes and along with the acquired SAR, the chemical library was screened to identify lead multifunctional candidates.