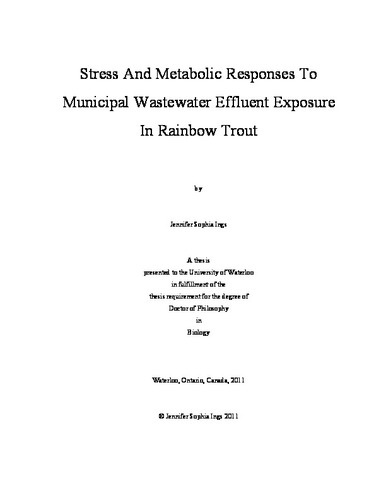 Municipal wastewater effluent (MWWE) is an important source of pollution in the aquatic environment impacting fish. MWWE is a complex mixture of chemicals including pharmaceuticals, personal care products, industrial chemicals and pesticides. A link between reproductive endocrine disruption and MWWE exposure has been established in fish, but less is known about the effects of MWWE on non-reproductive endocrine disruption. The overall objective of this thesis was to examine the impacts of MWWE exposure on the stress response and intermediary metabolism in rainbow trout (Oncorhynchus mykiss). In fish, the primary adaptive organismal stress response involves the activation of hypothalamic-sympathetic-chromaffin axis to produce catecholamines, predominantly epinephrine, and the hypothalamic-pituitary-interrenal (HPI) axis to produce cortisol. Both of these hormones play a key role in elevating plasma glucose levels that is essential to fuel the increased energy demand associated with stress. Along with the organismal stress response, the cellular stress response, involving the synthesis of a suite of heat shock proteins (hsps), also plays an important role in protecting cellular protein homeostasis in response to stressors, including toxicants. The impact of MWWE on stress-related pathways were identified using a low-density trout cDNA microarray enriched with genes encoding for proteins involved in endocrine-, stress- and metabolism-related processes. This was further confirmed by assessing plasma hormone and metabolite levels and stress-related targeted genes and proteins expression and enzyme activities in select tissues in rainbow trout. Studies were carried out in controlled field (caging) and laboratory experiments to examine the impacts of MWWE on stress and tissue-specific metabolic responses in rainbow trout. Further in vitro studies using rainbow trout hepatocytes in primary cultures were carried out to investigate the mechanism of action of two pharmaceuticals, atenolol and venlafaxine, found in relatively high concentrations in MWWE in impacting the stress-mediated glucose response. In caged fish, MWWE exposure significantly elevated plasma cortisol and glucose concentrations, and altered the mRNA abundance of a number of stress-related genes, hormone receptors, glucose transporter 2 and genes related to immune function. When fish were exposed to an acute handling stress following a 14 d exposure to MWWE, the cortisol response was abolished and the glucose response was attenuated. The effects on cortisol did not correlate with changes in the expression of genes involved in cortisol biosynthesis, but were associated with an increase in hepatic glucocorticoid receptor (GR) protein expression. Upon further investigation in controlled laboratory studies, MWWE exposure elevated constitutive hsp 70 and hsp90 expression after 8 d exposure, which correlated with a decrease in glycogen levels in the liver in fish exposed to a high concentration of MWWE compared to control fish, pointing to a MWWE-induced increase in liver energy demand. By 14 d, glycogen stores were replenished, and this was commensurate with increases in liver gluconeogenic capacity, including increases in the activities of phosphoenolpyruvate carboxykinase (PEPCK) and alanine aminotransferase (AlaAT), along with a decrease in liver GR expression. In the heart, GR protein expression increased in treated fish, and the activity of pyruvate kinase increased, indicating an increase in glycolytic capacity. Subjecting the MWWE exposed fish to a secondary handling disturbance (acute stress) led to an attenuated plasma cortisol and glucose response compared to the control group. This corresponded with a reduced liver gluconeogenic capacity and a lower liver and heart glycolytic capacities, reflecting a disturbance in the energy substrate repartitioning that is essential to cope with stress. While it is difficult to establish causative agents from a complex mixture such as MWWE, the two pharmaceutical that were tested impacted glucose production. Specifically, atenolol and venlafaxine disrupted the epinephrine-induced glucose production, but did not modify cortisol-mediated glucose production in trout hepatocytes. The suppression of epinephrine-mediated glucose production by atenolol and venlafaxine was abolished by cAMP analogue (8-bromo cAMP) or glucagon (a metabolic hormone that increases glucose production). This suggests that both drugs disrupt β-adrenoceptor signaling, while it remains to be determined if the response is receptor isoform-specific. Altogether MWWE exposure disrupts the organismal and cellular stress responses in trout. Key targets for MWWE impact leading to the impaired cortisol and metabolic responses to stress include liver and heart GR expression, liver gluconeogenic capacity, and liver, heart and gill glycolytic capacities. Most significantly, MWWE impairs the ability to metabolically adjust to a secondary acute stressor, which is an important adaptive process that is integral to successful stress performance. From an environmental stand-point, long-term exposure to MWWE will lead to reduced fitness and will compromise the capacity of fish to cope with additional stressor, including escape from predators.