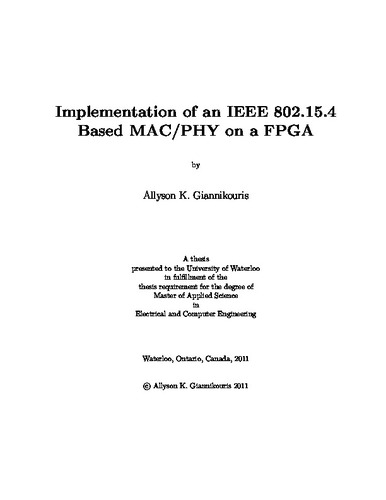 The IEEE 802.15.4 standard defines the implementation of a Low-Rate Wireless Personal Area Network (WPAN). While the current version of the standard was ratified in 2006, there is still no readily available Medium Access Control (MAC) layer and/or Physical (PHY) layer for Altera Field Programmable Gate Arrays (FPGAs) in the public domain. This research investigates the implementation of the standard using an Altera FPGA for the MAC layer and PHY layer drivers. The Freescale MC13192 transceiver was used for the physical portion of the PHY layer, which includes the RF front end of the system. The purpose of this research was to implement a basic full function device (FFD), which is capable of acting as a node in the network, as well as co-ordinating it. This allows a simple network to be tested by loading the same code on two FPGA boards, with one configured to act as a coordinator and the other as a device. The flexibility of the standard means that there are several implementation choices to be made, each of which limits the compatibility with devices using other implementation options. The implementation and design decisions made in producing a preliminary core are described in detail. The implementation of the MAC layer primitives is discussed at length as these were not available as source code. These primitives are the building blocks for the core functions of the system. Specifically, the functionality of the Energy Detection (ED) scan, stream transmit and stream receive functions are explored in detail. The code has been implemented using C and is run on the Altera Nios II soft-core processor. The work presented here is an initial implementation meant to serve as a foundation for further research. Additional functionality defined by the standard could be added, or optimization of individual functions could be explored. The current implementation also has the potential to serve as the foundation for research into various sensors which may be part of end devices in the network.