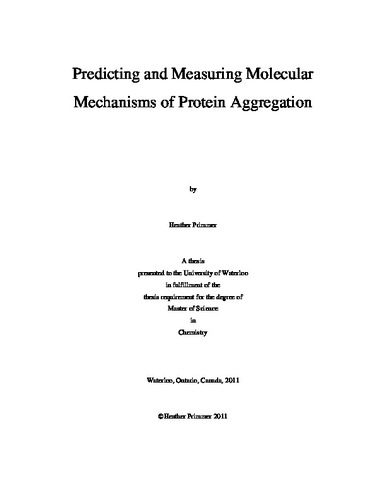 Protein aggregation is a hallmark of a number of neurodegenerative disorders including Alzheimer’s Disease, Huntington’s Disease, and Amyotrophic Lateral Sclerosis. Despite the common occurrence of protein aggregation in disease, the fundamental mechanisms controlling the propensity of a protein to aggregate are not well understood. Over the past decade, one of the most significant advancements in the field of understanding protein aggregation has been the development of several aggregation prediction algorithms. In this study, two separate approaches were used to investigate the detailed molecular mechanisms of protein aggregation. First, a thorough investigation that compared nine protein aggregation prediction techniques was performed. Protein aggregation propensity calculations were performed on wild type and mutant sequences of three diverse proteins including Superoxide Dismutase (SOD), human Acylphosphatase (AcP), and the amyloid beta peptide (Aβ42). This study presents the first wide-scale comparison of such a large number of prediction algorithms, and additionally provides new information on the ability of the algorithms to successfully predict the experimentally observed aggregation of several mutations of diverse proteins. The algorithms were predominantly developed based on a set of known amyloid-forming proteins and peptides, however, are quite diverse in the way they were designed and the proteins on which they were tested. Interestingly, significant variation was observed when predicting the aggregation propensity of identical sequences by multiple techniques, indicating that the algorithms do not possess a consensus on the primary factors that govern aggregation. Further analyses compared predicted and observed aggregation data for several mutants of the test proteins. The aggregation prediction algorithms predominantly demonstrated poor to moderate correlations with observed aggregation, and the strongest correlations occurred in instances where the test data was used in the development of the algorithms. The general lack of ability of the algorithms to predict the aggregation patterns of more than one test protein suggests that aggregation may be a much more specific process that it is generally attributed to be in that there may be inherently different properties modulating the aggregation mechanisms of different proteins towards varying aggregate structures. The second component of this project was to experimentally examine the role of salt in influencing protein aggregation as a method to elucidate the specific molecular mechanisms controlling protein aggregation pathways. The ALS-causing SOD1 mutation, A4V, in both the oxidized and reduced apo form, was used as a model protein. The role of NaCl and Na2SO4 in mediating protein aggregation was studied using several techniques. While oxidized apo A4V showed very little evidence of aggregation even in the presence of salt, for reduced apo, aggregates readily formed and were promoted by the addition of salt. This finding correlated with the increasing kosmotropic nature of the salt as described by the Hofmeister series. The aggregates formed in the presence of salt contained intermolecular disulphide bonds and demonstrated ANS and ThT binding, indicating aggregates are likely to be largely hydrophobic and possess beta-sheet morphology. Salt promotes protein aggregation in two ways: 1) electrostatic interactions shield protein charges and reduce repulsion between proteins, and 2) specific interactions stabilize various aggregation-prone conformations of the protein. This work is evidence of the important role of salt in influencing protein aggregation and provides a framework for future studies into the complex effects of solution conditions in modulating protein aggregation pathways. Both aspects of this study contribute greatly to furthering the understanding of the molecular mechanisms governing protein aggregation. This is of particular importance to neurodegenerative diseases, where uncovering the factors that modulate the formation of toxic aggregate species is important for disease treatment and prevention. The potential aggregation mechanisms of SOD1, and the contributions it may play in ALS pathogenesis, will be discussed throughout this study.