Public Servants or Professional Alienists?: Medical Superintendents and the Early Professionalization of Asylum Management and Insanity Treatment in Upper Canada, 1840-1865 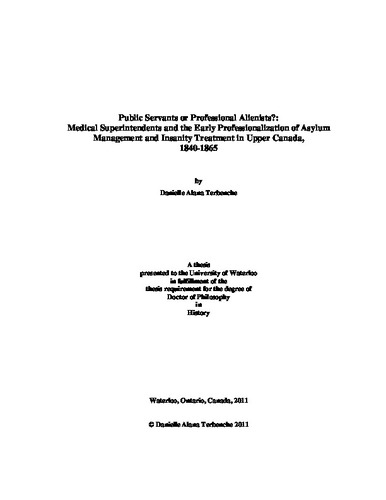 In nineteenth-century Upper Canada (Ontario), professional work was a primary means by which men could improve their social status and class position. As increasing numbers of men sought entry into these learned occupations, current practitioners sought new ways of securing prominent positions in their chosen professions and asserting themselves as having expertise. This dissertation studies the activities and experiences of the five physicians who, as the first medical superintendents (head physicians) at the Provincial Lunatic Asylum, Toronto from 1840 to 1865, sought such enhanced professional status. Opened in January 1841 as a public welfare institution, the Toronto asylum was housed initially in a former jail; in 1850 it was relocated to a permanent building on Queen Street West. During the asylum’s first twenty-five years of operation physicians Drs. William Rees, Walter Telfer, George Hamilton Park, John Scott, and Joseph Workman successively held the position of medical superintendent at the institution. Given the often insecure status of physicians working in private practice, these doctors hoped that government employment at the asylum would bring greater stability and prestige by establishing them as experts in the treatment of insanity. Yet professional growth in Upper Canada during the Union period (1840-1867) occurred within the context of the colony’s rapidly changing socio-political culture and processes of state development, factors that contributed to the ability of these doctors to “professionalize” as medical superintendents. Rees, Telfer, Park, and Scott would never realize enhanced status largely due to the constraints of Upper Canada’s Georgian social culture in the 1840s and early 1850s. During the 1850s, however, demographic, political, and religious changes in the colony brought about a cultural transition, introducing social values that were more characteristically Victorian. For Joseph Workman, whose beliefs more reflected the new Victorian culture, this cultural shift initially involved him in professional conflicts brought about by the social tensions occurring as part of the transition. Nevertheless, by the 1860s, changes in government led to the development of new legislation and departmentalization of welfare and the public service that led him to gain recognition as a medical expert in a unique field.