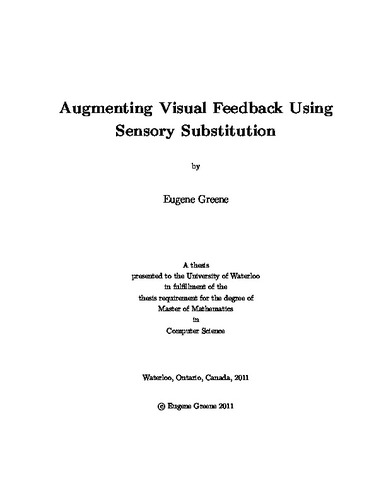 Direct interaction in virtual environments can be realized using relatively simple hardware, such as standard webcams and monitors. The result is a large gap between the stimuli existing in real-world interactions and those provided in the virtual environment. This leads to reduced efficiency and effectiveness when performing tasks. Conceivably these missing stimuli might be supplied through a visual modality, using sensory substitution. This work suggests a display technique that attempts to usefully and non-detrimentally employ sensory substitution to display proximity, tactile, and force information. We solve three problems with existing feedback mechanisms. Attempting to add information to existing visuals, we need to balance: not occluding the existing visual output; not causing the user to look away from the existing visual output, or otherwise distracting the user; and displaying as much new information as possible. We assume the user interacts with a virtual environment consisting of a manually controlled probe and a set of surfaces. Our solution is a pseudo-shadow: a shadow-like projection of the user's probe onto the surface being explored or manipulated. Instead of drawing the probe, we only draw the pseudo-shadow, and use it as a canvas on which to add other information. Static information is displayed by varying the parameters of a procedural texture rendered in the pseudo-shadow. The probe velocity and probe-surface distance modify this texture to convey dynamic information. Much of the computation occurs on the GPU, so the pseudo-shadow renders quickly enough for real-time interaction. As a result, this work contains three contributions: a simple collision detection and handling mechanism that can generalize to distance-based force fields; a way to display content during probe-surface interaction that reduces occlusion and spatial distraction; and a way to visually convey small-scale tactile texture.