Impact of Pedestrian Volumes on the Operational Performance of Modern Roundabouts 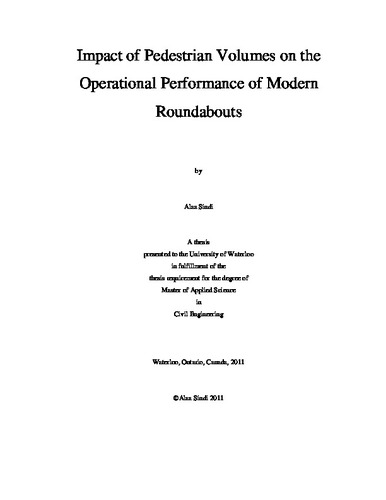 Modern roundabouts are increasingly being considered as a preferred intersection design within urban street networks in North America due, in large part, to the increased safety provided by roundabout. In the last decade, much research has been conducted in North America to quantify the performance of roundabouts in terms of vehicle delay as a function of vehicle traffic volume and roundabout geometry. In most jurisdictions, vehicles entering and existing the roundabout are required by law to yield right-of-way to pedestrians crossing the roundabout approach, and consequently, the presence of substantial pedestrian volumes are expected to degrade operational performance of the roundabout for vehicles. However, very little research has been conducted to estimate the impact that pedestrian volumes have on average vehicle delay. The aim of this research is to study the effects of pedestrian volume, entry traffic volume, and conflicting or circulating volume, on the delays that vehicles experience when traversing the roundabout. An analytical model is proposed to estimate vehicle delays on the basis of traffic flow and queuing theory. The model is applicable to single lane roundabouts. The model was calibrated and validated using vehicle delays obtained from the micro-simulation software, VISSIM (version 5.2) for a range of different conditions. The research described in this thesis demonstrates that pedestrian flows cause delays to vehicles traversing the roundabout in four distinct ways. Existing analytical techniques included within most design manuals consider only one of these sources of delays and consequently, conventional models typically under-estimate the impact that pedestrian flows have in terms of increasing delays to vehicles traversing the roundabout.