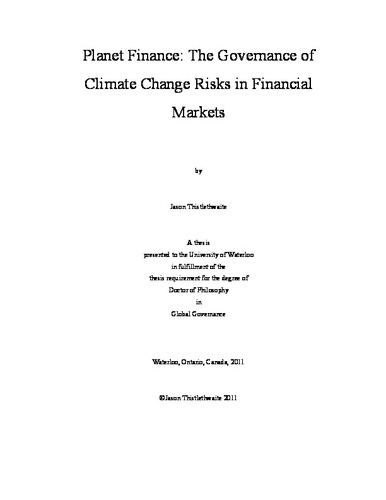 This thesis asked two research questions: 1) how are the Climate Disclosure Standards Board (CDSB) and ClimateWise designed to achieve their objectives and 2) what explains the emergence of these unique initiatives? In answer to the first question, the thesis argues that the CDSB and ClimateWise adopt an “unconventional” approach to environmental co-regulation that embraces what I call “cognitive governance” within accounting (CDSB) and insurance (ClimateWise) markets. Many scholars describe environmental co-regulation as a voluntary agreement between transnational corporations (TNCs) and environmental non-governmental organizations (ENGOs) to enforce best practice standards that improve corporate environmental performance without the use of state authority. Cognitive governance employs a more unconventional approach to co-regulation by trying to embed financial knowledge that links a firm’s environmental performance to financial risks throughout the global economy vis-à-vis an expansion of state authority. More specifically, the CDSB and ClimateWise use best practice standards to leverage accounting and insurance knowledge in generating a technical and political consensus that supports expanding public regulation to govern financial risks related to climate change. In answer the second question, the thesis argues that this unconventional co-regulatory strategy adopted by the CDSB and ClimateWise emerged in response to three factors. First, financial firms (in addition to corporate emitters in the case of the CDSB) had material interests in using public regulation to govern climate change risks. Second, these actors realized that collaboration was needed to generate a technical and political consensus among constituencies willing to support public regulation governing climate change risks. Third, ENGOs existed that had interests in using their technical expertise and political capacity to help generate this needed consensus through co-regulation. The thesis makes three contributions to the advancement of scholarly knowledge in the fields of international political economy (IPE) and global environmental politics (GEP). First, IPE and GEP scholars have have largely overlooked the emergence of environmental co-regulation in financial markets, and in particular, have yet to analyze the CDSB and ClimateWise. This study addresses this gap by revealing an effort to mobilize the accounting and insurance industry in strengthening global climate governance. Second, scholars have also tended to view co-regulation through a “post-Westphalian” lens that sees co-regulation as designed to pre-empt or generate an alternative to public regulation. The CDSB and ClimateWise’s strategy, and the factors that explain the creation of these initiatives, challenge this perspective. Third, analysis of this strategy also contributes to emerging scholarship on the influence of “cognition” in shaping market actors’ behavior in conditions of uncertainty.