On the Erdös-Turán conjecture and related results 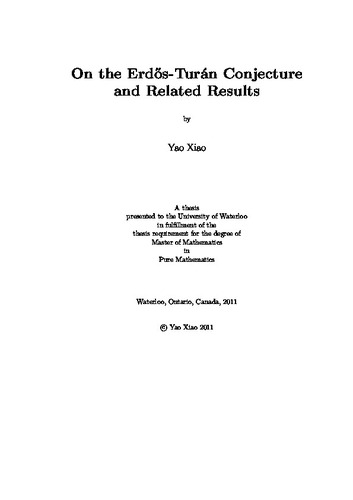 The Erdös-Turán Conjecture, posed in 1941 in, states that if a subset B of natural numbers is such that every positive integer n can be written as the sum of a bounded number of terms from B, then the number of such representations must be unbounded as n tends to infinity. The case for h = 2 was given a positive answer by Erdös in 1956. The case for arbitrary h was given by Erdös and Tetali in 1990. Both of these proofs use the probabilistic method, and so the result only shows the existence of such bases but such bases are not given explicitly. Kolountzakis gave an effective algorithm that is polynomial with respect to the digits of n to compute such bases. Borwein, Choi, and Chu showed that the number of representations cannot be bounded by 7. Van Vu showed that the Waring bases contain thin sub-bases. We will discuss these results in the following work.