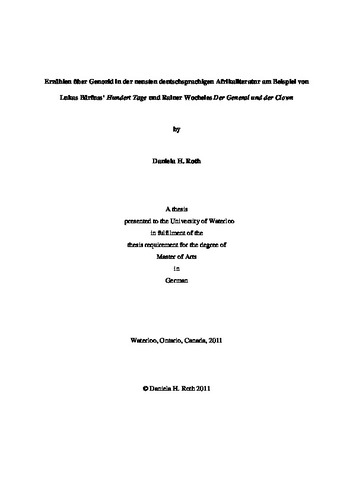 In this thesis, I set out to examine how Lukas Bärfuss’ Hundert Tage and Rainer Wochele’s Der General und der Clown represent the Rwandan genocide. I argue that narrative structures foreground the protagonists, their feelings and personal suffering rather than real events. The violence that occurred during the Rwandan genocide is narrated through the protagonists’ perspective and reflected in their development throughout the course of the novels. In a post-Holocaust and postcolonial paradigm German-speaking authors have to be mindful of the issues associated with topics such as genocide on the African continent. Especially texts written by German-language authors have to reflect on the violent history of German-speaking countries and they have to problematize traditional stereotypes that are connected with former colonies. Writing about genocide on a different continent highlights the difficulty of “speaking the unspeakable.” My analysis shows that both novels use narrative devices such as frame-narration and the separation between homo- and heterodiegetic narrators and their focalizers to create narrative and emotional distance from the characters and events. Further, the personal character traits and the development of the protagonists over the course of the novels are used to reflect both on the violence and the possibilities of narrating such extreme events. Both novels portray their protagonists as self-involved persons. I conclude that the statements they make about the genocide and their surroundings are ambiguous because they only relate those events that can be connected to the construction of the protagonists’s own identity. They present only parts of what they have seen in order to create a one-sided picture of themselves and of their suffering. In the first chapter of the main part of my thesis I provide an introduction about the issues associated with writing about the Rwandan genocide and locate Bärfuss and Wochele within the German-language tradition of writing about Africa. In the second chapter of the main part I examine how narrative strategies are used to call into question the veracity of the accounts of their protagonists. Furthermore, I argue that these narrative structures are also used to place special emphasis on the protagonists. The third chapter focuses on the protagonists’ perception of events and how their perspective is influenced by cultural stereotypes. I suggest that both protagonists aspire to create a certain picture of themselves, but a close reading reveals that both protagonists are influenced by cultural prejudices. These influences can also be seen in how they talk about the violence they have experienced. The last chapter investigates how violence is portrayed in the two novels. It becomes clear that the protagonists use descriptions of violence to foreground their own experiences, feelings and suffering rather than the actual genocide. I conclude that writing about genocide in a German-language context requires new narrative techniques to speak the unspeakable. Bärfuss and Wochele do not lay claim to any kind of truth. By problematizing their characters’ reliability as eye-witnesses, they undermine the notion that a universal “truthful” account of the events can be achieved. By focussing on their protagonists’ own suffering they highlight the “dark” continent’s role as the “other” in the self-conception of the West. Both authors use their protagonists to describe the violence that occurred in Rwanda and they do not absolve the murderers, but they also implicate their own protagonists and postcolonial Western cultural politics and stereotypes in contributing to the genocide.