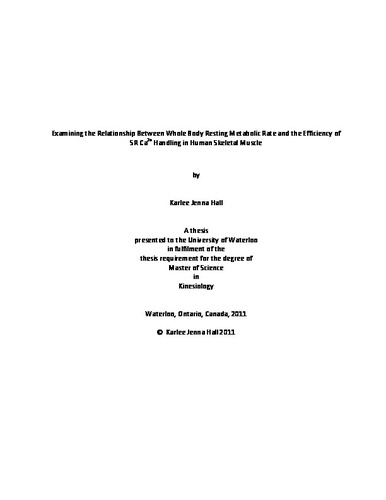 The purpose of this study was to investigate whether skeletal muscle sarcoplasmic reticulum (SR) Ca2+ transport efficiency and expression levels of major SR Ca2+ regulatory proteins are associated with resting metabolic rate (RMR) in humans. Twenty five healthy and weight stable participants with mean age, height and weight of 22±3.6 years, 174.6±8.0 cm and 72.8±21 kg respectively, were recruited for the study. RMR was calculated using the Weir equation based upon measures of VO2 and VCO2, which were collected using the Vmax breath by breath indirect calorimetry system. Ca2+-ATPase activity, Ca2+ uptake and Ca2+ leak analyses were performed in vitro on homogenates that were prepared from vastus lateralis muscle biopsies. Ionophore (IONO) ratio was assessed by measuring Ca2+-ATPase activity in the presence and absence of Ca2+ Ionophore. The coupling ratio, a measure of SR Ca2+ transport efficiency, was calculated by taking the ratio of Ca2+ uptake to Ca2+-ATPase activity. Expression levels of the major SR Ca2+ regulatory proteins, including SERCA1a, SERCA2a, phospholamban (PLN), and calsequestrin (CSQ) were assessed using Western blotting techniques. Pearson correlation coefficient analysis demonstrated a weak but significant negative correlation between coupling ratio and RMR (r2= 0.2108, p =0.0240). Content of the SR Ca2+ regulatory proteins, IONO ratio and Ca2+ leak were not found to be significantly related to either RMR or coupling ratio, with the exception of the ratio of SERCA1a to SERCA2a, which showed a weak but significant positive relationship with RMR (r2=0.1781, p=0.0400). Thus, the relationship between coupling ratio and RMR is not influenced by Ca2+ leak, SERCA pump efficiency or the SR Ca2+ regulatory proteins. Overall, these results suggest that the efficiency of SR Ca2+ transport is weakly related to whole body RMR. Further analysis is needed to assess this relationship, and to determine which SR Ca2+ handling properties are influencing the relationship between coupling ratio and RMR.