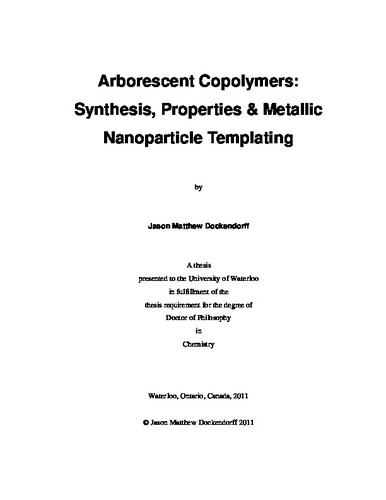 Graft copolymers with a dendritic (arborescent) architecture and unimolecular micelle properties have been synthesized and examined for their solution properties as well as their ability to serve as templates for the preparation of metallic nanoparticles. The research focused on two types of arborescent copolymers, namely core-shell (CS) and core-shell-corona (CSC) architectures. Copolymer amphipolarity was provided by a hydrophobic polystyrene (PS) component and a polar poly(2-vinylpyridine), P2VP, phase. The CS copolymers were obtained by grafting P2VP onto linear or branched PS substrates to yield PS-g-P2VP unimolecular micelles. These copolymers exhibited solubility with limited aggregation in aqueous environments after protonation with HCl. Coordination of the coronal P2VP phase with HAuCl4 was achieved, and the resulting polymer-stabilized metallic nanoparticles had a spherical morphology. The tri-layered copolymers were synthesized in similar fashion, by grafting PS-b-P2VP block copolymers onto linear or branched PS substrates to afford a CSC morphology with a PS core, a P2VP inner shell, and a PS corona. While the grafting reaction proceeded with lower than expected grafting yields as compared to grafting reactions of homopolymer side-chains, significant P2VP content and molecular weight increases were achieved. It was determined that aggregation of the block copolymer side-chains hindered the coupling reaction of the reactive centers with the substrate. After purification of the PS-g-(P2VP-b-PS) arborescent copolymers, in part by developing a cloud-point centrifugation purification technique, the spherical copolymers were successfully loaded with various metallic compounds. The uptake of compounds such as HAuCl4 by the P2VP phase of the copolymers induced intramolecular phase segregation for copolymers of generations (G) 2 and above. Phase segregation produced some unique and intricate morphologies different from the ones observed previously for other unimolecular metal scaffolds. Intramolecular toroidal, nodular, and cylindrical morphologies were observed for the G2, G3, and G4 arborescent copolymers, respectively. Templates of generations 0 and 1 displayed a spherical morphology similar to their PS-b-P2VP intermolecular micelle analogues when loaded with metals. Phase segregation is believed to be mediated mainly by the characteristics of the PS core, the length of the P2VP segments having less influence on the morphologies obtained. Reduction of the metallic salts was performed using various agents and protocols. Stronger reducing agents yielded smaller and more narrowly distributed gold nanoparticles, while other reduction methods also removing the polymer scaffold resulted in larger nanoparticles.