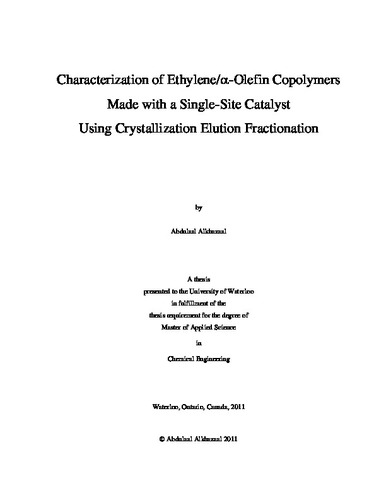 A new analytical technique to measure the chemical composition distribution (CCD) of polyolefins, crystallization elution fractionation (CEF), was introduced in 2006 during the First International Conference on Polyolefin Characterization. CEF is a faster and higher resolution alternative to the previous polyolefin CCD analytical techniques such as temperature rising elution fractionation (TREF) and crystallization elution fractionation (CRYSTAF) (Monrabal et al., 2007). Crystallization elution fractionation is a liquid chromatography technique used to determine the CCD of polyolefins by combining a new separation procedure, dynamic crystallization, and TREF. In a typical CEF experiment, a polymer solution is loaded in the CEF column at high temperature, the polymer is allowed to crystallize by lowering the solution temperature, and then the precipitated polymer is eluted by a solvent flowing through the column as the temperature is raised. CEF needs to be calibrated to provide quantitative CCD results. A CEF calibration curve consists of a mathematical relationship between elution temperature determined by CEF and comonomer fraction in the copolymer that could be estimated by Fourier transform infrared spectroscopy (FTIR) and carbon-13 nuclear magnetic resonance (13C NMR). Different comonomer types in ethylene/α-olefin copolymers will have distinct calibration curves. The main objective of this thesis is to obtain CEF calibration curves for several different ethylene/α-olefin copolymers and to investigate which factors influence these calibration curves. A series of homogeneous ethylene/α-olefin copolymers (1-hexene, 1-octene and 1-dodecene) with different comonomer fractions were synthesized under controlled conditions to create CEF calibration standards. Their average chemical compositions were determined by 13C NMR and FTIR and then used to establish CEF calibration curves relating elution temperature and comonomer molar fraction in the copolymer.