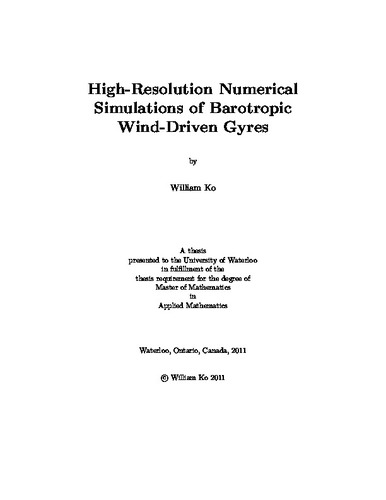 The dynamics of the world's oceans occur at a vast range of length scales. Although there are theories that aid in understanding the dynamics at planetary scales and microscales, the motions in between are still not yet well understood. This work discusses a numerical model to study barotropic wind-driven gyre flow that is capable of resolving dynamics at the synoptic, O(1000 km), mesoscale, O(100 km) and submesoscales O(10 km). The Quasi-Geostrophic (QG) model has been used predominantly to study ocean circulations but it is limited as it can only describe motions at synoptic scales and mesoscales. The Rotating Shallow Water (SW) model that can describe dynamics at a wider range of horizontal length scales and can better describe motions at the submesoscales. Numerical methods that are capable of high-resolution simulations are discussed for both QG and SW models and the numerical results are compared. To achieve high accuracy and resolve an optimal range of length scales, spectral methods are applied to solve the governing equations and a third-order Adams-Bashforth method is used for the temporal discretization. Several simulations of both models are computed by varying the strength of dissipation. The simulations either tend to a laminar steady state, or a turbulent flow with dynamics occurring at a wide range of length and time scales. The laminar results show similar behaviours in both models, thus QG and SW tend to agree when describing slow, large-scale flows. The turbulent simulations begin to differ as QG breaks down when faster and smaller scale motions occur. Essential differences in the underlying assumptions between the QG and SW models are highlighted using the results from the numerical simulations.