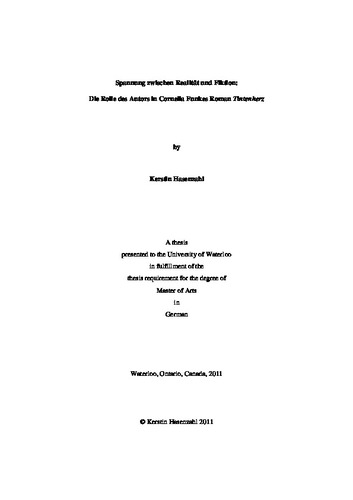 This thesis explores the tension between fiction and reality in Cornelia Funke’s novel Tintenherz (Inkheart), and the importance of the figure and the function of the author as an influential character of the perception of both. I argue that Tintenherz challenges traditional distinctions between reality and fiction, which are aimed at affecting the reader’s understanding of his/her reality. While this blurring of boundaries is evident in a number of instances throughout the text, it can best be seen in the figure of the intradiegetic author who has also written a novel called “Tintenherz.” This fictional author can interact with his literary figures and influence both the hypodiegetic and his own (intradiegetic) world by adding to the text even after it has been published, thereby challenging the distinction between both reality and fiction, the narrated world and the book itself. The starting point of my analysis is Roland Barthes’ claim of the “Death of the Author” (1968), which conceives of the author as a “writerly” function that is only present in the creation of the text, rendering the author redundant for the analysis of the text. As Michel Foucault argues, however, the author has to be considered in the interpretation because he/she functions as the authority that forms the discourses contained in the text. Fotis Jannidis goes even further by asserting that there are several functions that can be fulfilled by the author, by the text itself or by the reader. Tintenherz presents another concept of the character of the author (Fenoglio), which I examine in this thesis, based on both how other characters and Fenoglio view the author’s role in the novel. In the first part of my thesis I explain the “book-within-a-book”-motif that is the foundation of the Tintenwelt (the world that is created in “Tintenherz”) as well as of the blurring between reality and fiction. The borders between the two narrated worlds can be crossed by characters from both worlds under certain circumstances. Since the characters experience both worlds as “real,” the status of both is uncertain. Fenoglio, the author of “Tintenherz,” is influential in that he can change both the storyline and the narrated world itself. This author, however, is dependent on a reader, who can bring the literary characters and objects to life so that they appear in his/her world. I still argue that the character of the author is the main authority on changing narrated worlds. Contrary to Barthes’ concept of an author who is only present in his/her own text, Funke’s fictional character Fenoglio is influential and wields a large amount of power over the world in which he lives, as well as over the world he created. The presence of the author as a character in the text has an effect on the perception of reality and fiction because he must interact with characters that emerge from his own fictional work. The empirical author Funke also contributes to this reexamination of the status of reality. Funke set up a homepage through which she can interact with her readers, turning passive readers into a community of active writers and respondents. She claims that it is in her interest to encourage her readers to reflect on their own world. Using quotations from other literary texts, she also establishes a tension between several fictional works or worlds. My thesis shows the different ways in which the status of fiction and reality are questioned and challenged. I conclude that the author contributes to this questioning: Funke foregrounds the image of the author in the book which makes the readers aware of its function and the functions Jannidis describes. She also presents herself as an influential author, implicitly refuting Barthes’ claim of the “Death of the Author.”