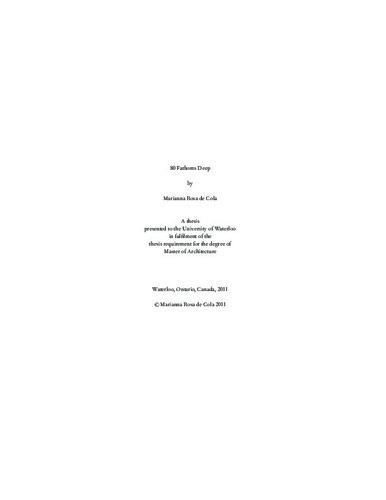 The history of Newfoundland is intimately tied to its relationship with the sea, to its island status and its consequent cultural isolation, to its reliance on fishing and more recently oil. But it is also one of tides - of prosperity and loss, migration and resettlement, of occupation and erasure. This research is an investigation into the nature of mutable landscapes – shifting settlements, resources and infrastructures. It is recognized that the needs of each community and the resources of each environment are diverse in type and supply. The spatialization of an energy infrastructure has the opportunity to link, in a dynamic system, the ecological, political, cultural, and historical constituents atomized communities. It has the potential to be a dynamic system that forces a presence in the everyday lives of a cultural habitat. This investigation tests the possibility for a contemporary energy infrastructure, usually hidden from the cultural landscape, to become a physically and culturally pronounced manifestation of a layered historical narrative. This work exhumes histories of Newfoundland and uncovers omnipresent themes of mutability, shifting, movement, and transience, presenting the history of Newfoundland as a fluctuating story of the sea. These stories not only frame the historical spatializations of Newfoundland’s population, its infrastructures, and economies through various media, but they also simultaneously outline the social and economic deficiencies of modern approaches to developing the island. Structured chronologically, the research forms the basis for an investigation into new ideas for an infrastructure off the southern coast of Newfoundland. This design project exemplifies themes of shifting and movement through a mobile, water-based energy, research, and cultural infrastructure. It is situated off the southern coast of Newfoundland and engages both the land and the sea. This thesis does not try to tame, resolve, or control the sea. The sea is always itself, ordered by its own cycles of tides, currents and ecologies. One can really only synchronize the relationships between land and sea.