The Attentional Routing Circuit: A Neural Model of Attentional Modulation and Control of Functional Connectivity 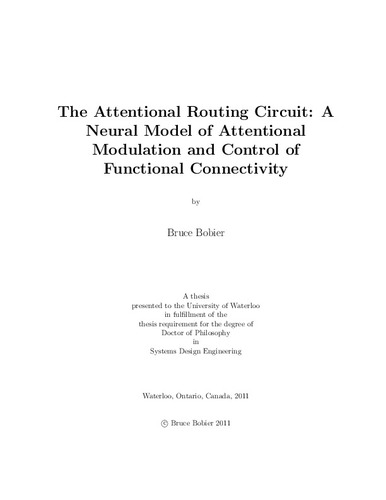 Several decades of physiology, imaging and psychophysics research on attention has generated an enormous amount of data describing myriad forms of attentional effects. A similar breadth of theoretical models have been proposed that attempt to explain these effects in varying amounts of detail. However, there remains a need for neurally detailed mechanistic models of attention that connect more directly with various kinds of experimental data -- behavioural, psychophysical, neurophysiological, and neuroanatomical -- and that provide experimentally testable predictions. Research has been conducted that aims to identify neurally consistent principles that underlie selective attentional processing in cortex. The research specifically focuses on describing the functional mechanisms of attentional routing in a large-scale hierarchical model, and demonstrating the biological plausibility of the model by presenting a spiking neuron implementation that can account for a variety of attentional effects. The thesis begins by discussing several significant physiological effects of attention, and prominent brain areas involved in selective attention, which provide strong constraints for developing a model of attentional processing in cortex. Several prominent models of attention are then discussed, from which a set of common limitations in existing models is assembled that need to be addressed by the proposed model. One central limitation is that, for many existing models, it remains to be demonstrated that their computations can be plausibly performed in spiking neurons. Further, few models address attentional effects for more than a single neuron or single cortical area. And finally, few are able to account for different forms of attentional modulation in a single detailed model. These and other limitations are addressed by the Attentional Routing Circuit (ARC) proposed in this thesis. The presentation of the ARC begins with the proposal of a high-level mathematical model for selective routing in the visual hierarchy. The mathematical model is used to demonstrate that the suggested mechanisms allow for scale- and position-invariant representations of attended stimuli to be formed, and provides a functional context for interpreting detailed physiological effects. To evaluate the model's biological plausibility, the Neural Engineering Framework (NEF) is used to implement the ARC as a detailed spiking neuron model. Simulation results are then presented which demonstrate that selective routing can be performed efficiently in spiking neurons in a way that is consistent with the mathematical model. The neural circuitry for computing and applying attentional control signals in the ARC is then mapped on to neural populations in specific cortical laminae using known anatomical interlaminar and interareal connections to support the plausibility of its cortical implementation. The model is then tested for its ability to account for several forms of attentional modulation that have been reported in neurophysiological experiments. Three experiments of attention in macaque are simulated using the ARC, and for each of these experiments, the model is shown to be quantitatively consistent with measured data. Specifically, a study by Womelsdorf et al. (2008) demonstrates that spatial shifts of attention result in a shifting and shrinking of receptive fields depending on the target's position. An experiment by Treue and Martinez-Trujllo (1999) reports that attentional shifts between receptive field stimuli produce a multiplicative scaling of responses, but do not affect the neural tuning sensitivity. Finally, a study by Lee and Maunsell (2010) demonstrates that attentional shifts result in a multiplicative scaling of neural contrast-response functions that is consistent with a response-gain effect. The model accounts for each of these experimentally observed attentional effects using a single mechanism for selectively processing attended stimuli. In conclusion, it is suggested that the ARC is distinguished from previous models by providing a unifying interpretation of attentional effects at the level of single cells, neural populations, cortical areas, and over the bulk of the visual hierarchy. As well, there are several advantages of the ARC over previous models, including: (1) scalability to larger implementations without affecting the model's principles; (2) a significant increase in biological plausibility; (3) the ability to account for experimental results at multiple levels of analysis; (4) a detailed description of the model's anatomical substrate; (5) the ability to perform selective routing while preserving biological detail; and (6) generating a variety of experimentally testable predictions.