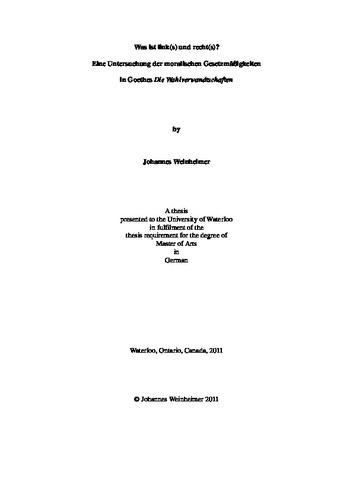 Abstract This thesis asks the question "Does the use of the words 'left' and 'right' (links / rechts), and their various lexical forms in Goethe‘s Wahlverwandtschaften constitute a systematic pattern which can be applied to interpret the novel as a whole?" It argues that to simply interpret the text on the basic semantic levels of these words—left indicating wrong and false, right indicating good and correct—would fail to reflect the complicated meanings and functions for each in the thematic content of the work. In addition to these two extremes, the 'middle' zone, the space between the two extremes, has an important function in the work and must be part of any broader interpretation. It combines both extremes, creates a neutral field, and also leads to a second important element, 'Gesetzmäßigkeit', roughly translated, 'systematization' which is crucial to an understanding of the novel as a whole. The thesis begins with an overview and discussion of research in German and English on the novel, narrowing its selection to the titles most pertinent to the present study, a necessary reduction given the vastness of extant research on Goethe and this novel. Using hermeneutic methodology based on Gadamer‘s theory, it then argues for and against the position of moral relativity with respect to the thematics of the novel at hand. The themes of morality, legality, and mirroring structures in society receive particular attention, so too Goethe‘s own position on these topics, as well as religion, which are reflected at least to some extent in the work, though the study goes well beyond that autobiographical level. For his lexical foundation, the author has investigated all occorrences of the words 'left' and 'right' in the novel, and their lexical variants, and has selected the most meaningful as the basis for detailed discussion. Still, all instances are offered to the reader in a separate appendix, if desired. The corpus analysis focusses on the main characters and passages relevant to them. After discussion of the research to date, an overview of the methodology, an outline of Goethe‘s position on morality, Christianity, and religion in general, and a detailed account of the presence of the words left and right and their variants in the novel, the thesis offers chapters on all of the main characters as well as a final one on peripheral figures, in each case analyzing the individuals within the context of the concepts left and right and their connotations. The conclusion (Fazit) summarizes its contribution to Goethe research and the new insights it offers with regard to Die Wahlverwandtschaften, namely, that the concepts of left and right do indeed form the basis of a structural pattern; that this has meaning in the moral, religious, and societal sense; and that it is basic to the notion of structural systematization in the work. It also goes further to suggest productive avenues for future research on this novel, including its connections to the work of Goethe‘s contemporary William Blake, Goethe‘s "Theory of Colours", and modern interpretations of the whole.