Convex relaxation for the planted clique, biclique, and clustering problems 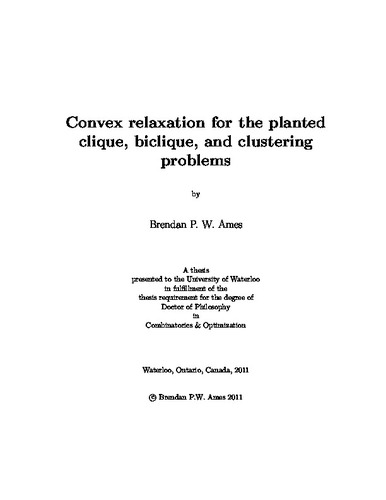 A clique of a graph G is a set of pairwise adjacent nodes of G. Similarly, a biclique (U, V ) of a bipartite graph G is a pair of disjoint, independent vertex sets such that each node in U is adjacent to every node in V in G. We consider the problems of identifying the maximum clique of a graph, known as the maximum clique problem, and identifying the biclique (U, V ) of a bipartite graph that maximizes the product |U | · |V |, known as the maximum edge biclique problem. We show that ﬁnding a clique or biclique of a given size in a graph is equivalent to ﬁnding a rank one matrix satisfying a particular set of linear constraints. These problems can be formulated as rank minimization problems and relaxed to convex programming by replacing rank with its convex envelope, the nuclear norm. Both problems are NP-hard yet we show that our relaxation is exact in the case that the input graph contains a large clique or biclique plus additional nodes and edges. For each problem, we provide two analyses of when our relaxation is exact. In the ﬁrst, the diversionary edges are added deterministically by an adversary. In the second, each potential edge is added to the graph independently at random with ﬁxed probability p. In the random case, our bounds match the earlier bounds of Alon, Krivelevich, and Sudakov, as well as Feige and Krauthgamer for the maximum clique problem. We extend these results and techniques to the k-disjoint-clique problem. The maximum node k-disjoint-clique problem is to ﬁnd a set of k disjoint cliques of a given input graph containing the maximum number of nodes. Given input graph G and nonnegative edge weights w, the maximum mean weight k-disjoint-clique problem seeks to identify the set of k disjoint cliques of G that maximizes the sum of the average weights of the edges, with respect to w, of the complete subgraphs of G induced by the cliques. These problems may be considered as a way to pose the clustering problem. In clustering, one wants to partition a given data set so that the data items in each partition or cluster are similar and the items in diﬀerent clusters are dissimilar. For the graph G such that the set of nodes represents a given data set and any two nodes are adjacent if and only if the corresponding items are similar, clustering the data into k disjoint clusters is equivalent to partitioning G into k-disjoint cliques. Similarly, given a complete graph with nodes corresponding to a given data set and edge weights indicating similarity between each pair of items, the data may be clustered by solving the maximum mean weight k-disjoint-clique problem. We show that both instances of the k-disjoint-clique problem can be formulated as rank constrained optimization problems and relaxed to semideﬁnite programs using the nuclear norm relaxation of rank. We also show that when the input instance corresponds to a collection of k disjoint planted cliques plus additional edges and nodes, this semideﬁnite relaxation is exact for both problems. We provide theoretical bounds that guarantee exactness of our relaxation and provide empirical examples of successful applications of our algorithm to synthetic data sets, as well as data sets from clustering applications.