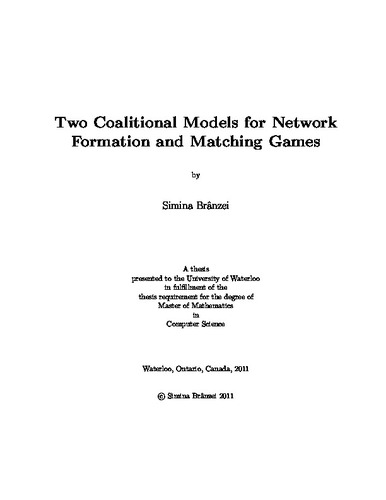 This thesis comprises of two separate game theoretic models that fall under the general umbrella of network formation games. The first is a coalitional model of interaction in social networks that is based on the idea of social distance, in which players seek interactions with similar others. Our model captures some of the phenomena observed on such networks, such as homophily driven interactions and the formation of small worlds for groups of players. Using social distance games, we analyze the interactions between players on the network, study the properties of efficient and stable networks, relate them to the underlying graphical structure of the game, and give an approximation algorithm for finding optimal social welfare. We then show that efficient networks are not necessarily stable, and stable networks do not necessarily maximise welfare. We use the stability gap to investigate the welfare of stable coalition structures, and propose two new solution concepts with improved welfare guarantees. The second model is a compact formulation of matchings with externalities. Our formulation achieves tractability of the representation at the expense of full expressivity. We formulate a template of solution concept that applies to games where externalities are involved, and instantiate it in the context of optimistic, neutral, and pessimistic reasoning. Then we investigate the complexity of the representation in the context of many-to-many and one-to-one matchings, and provide both computational hardness results and polynomial time algorithms where applicable.