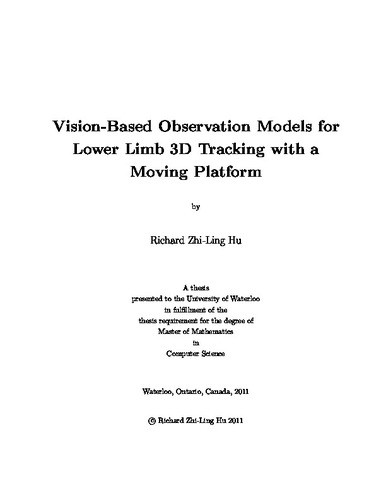 Tracking and understanding human gait is an important step towards improving elderly mobility and safety. This thesis presents a vision-based tracking system that estimates the 3D pose of a wheeled walker user's lower limbs with cameras mounted on the moving walker. The tracker estimates 3D poses from images of the lower limbs in the coronal plane in a dynamic, uncontrolled environment. It employs a probabilistic approach based on particle filtering with three different camera setups: a monocular RGB camera, binocular RGB cameras, and a depth camera. For the RGB cameras, observation likelihoods are designed to compare the colors and gradients of each frame with initial templates that are manually extracted. Two strategies are also investigated for handling appearance change of tracking target: increasing number of templates and using different representations of colors. For the depth camera, two observation likelihoods are developed: the first one works directly in the 3D space, while the second one works in the projected image space. Experiments are conducted to evaluate the performance of the tracking system with different users for all three camera setups. It is demonstrated that the trackers with the RGB cameras produce results with higher error as compared to the depth camera, and the strategies for handling appearance change improve tracking accuracy in general. On the other hand, the tracker with the depth sensor successfully tracks the 3D poses of users over the entire video sequence and is robust against unfavorable conditions such as partial occlusion, missing observations, and deformable tracking target.